Three years ago, J.J. Hensley had neither run a serious distance race nor thought about writing a book. But one challenge followed the other, and his debut novel, Resolve (The Permanent Press), is available now for pre-order on Kindle, with a hardback edition due tomorrow. 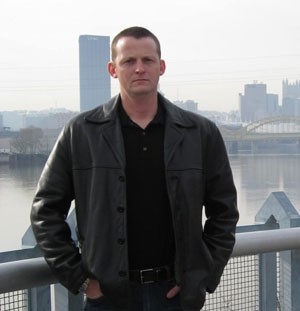 The book is structured around a running of the Pittsburgh Marathon, with “miles” instead of chapters. But the backstory is copious. As the race (and the book) begin, the first-person protagonist, criminology professor and former cop Cyprus Keller, informs us that before it’s over, he’ll have bumped off a fellow runner.

That’s what you call hitting the wall.

Hensley, who grew up in Huntington, W.V., is himself a former cop and former Special Agent with the U.S. Secret Service. He moved to the Pittsburgh area in 2006 to work for the U.S. Office of Personnel Management. The resident of Pittsburgh’s northern suburbs took up distance running and in 2010 completed his first half-marathon.

Right around that time, he also took his wife’s suggestion and turned his love of mysteries and thrillers (by the likes of James Grady, John Virdon and Vince Flynn) into his own writing habit.

“I started typing away,” he says simply. “It actually came fairly naturally to me.”

Building his own thriller around a distance race seemed natural, too. “You have a lot of time to think [during a race],” says Hensley, 38. “You’re running two-plus hours sometimes.” Moreover, he adds, “Each mile almost has its own story.”

Hensley’s sense of plotting and suspense, and his way with a short, snappy sentence, caught the eye (through his agent) of The Permanent Press, a long-running and rather prestigious indie publisher based in Sag Harbor, N.Y. The award-winning press, which has been featured in The New York Times, has published works that went on to win honors like the American Book Award.

Resolve is available in its Kindle incarnation tomorrow, and will shortly have other e-book and audio-book versions, says Hensley.

How to plan a marathon