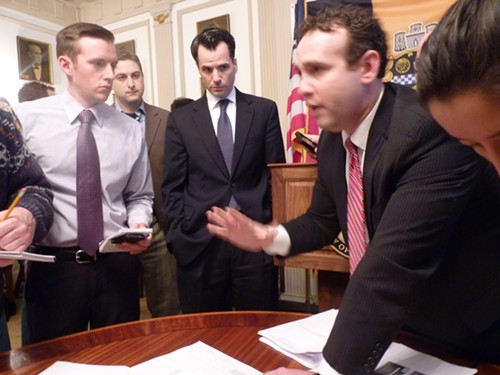 The account is apparently being probed by federal investigators looking into the city's bureau of police. As details of that investigation came to light, Mayor Luke Ravenstahl asked for the resignation of police chief Nate Harper. But that hasn't stemmed the flow of disclosures: All three officers in the mayor's security detail, it turns out, received a credit-union debit card — and former bodyguard Fred Crawford has accused the mayor's office of deploying the cards to conceal the mayor's activities.

Ravenstahl has staunchly denied those accusations — and even as he announced that he was dropping his bid for re-election, Zober sought to disprove them with today's release.

According to statements released by Karen Janoski, CEO of the credit union, Officer Matthew Gauntner had a debit card, but never used it. Officer Dominick Sciulli used the card a total of 15 times between January 2009 and November 2011. Both men are on the mayor's security detail.

Thirteen of Sciulli's transactions were for city business, and coincided with events on Ravenstahl's calendar, according to Zober. The events included trips to Harrisburg to meet with legislators, and a trip to Washington D.C. to attend a holiday party at the White House. 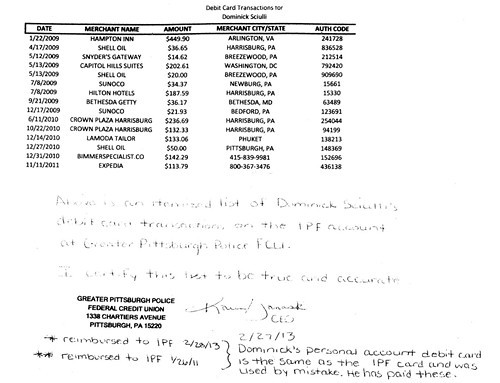 Two of the expenditures, Zober says, were personal expenses mistakenly made by Sciulli. One was for $133.06 for La Moda Tailor in Phuket, Thailand. The other was for Bimmer Specialist, a BMW parts company in 2010.

The mistake occurred, Zober says, because Sciulli also has a personal account at the credit union, with a debit card of its own. And that card looks just like the city-issued card, except for the letters "IPF" above his name. Sciulli repaid the 2010 expense a month after it was made when the charge did not show up on his personal bank statement. The Phuket expense was not repaid until Feb. 28, but Zober said that’s because the officer never knew the mistake had been made. 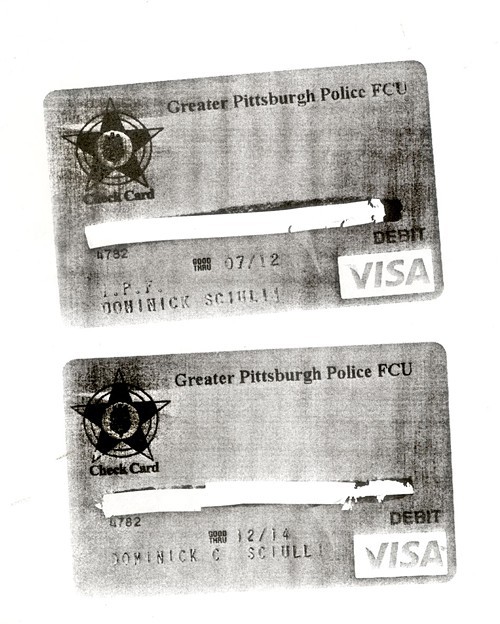 The release comes just days after Crawford claimed the cards were used to purchase alcohol and other items that the mayor wanted to hide from potential public-record requests from the media. He also said that officers were told to falsify their time sheets to reflect that they weren't out covering the mayor during late-night hours.

Zober says the release of these statements show that the card was not used for the direct benefit of the mayor and that they contained no illicit purchases.

"It becomes pretty clear that any allegation that these cards were used for purposes unintended by city government is inaccurate and not true," Zober said. The records, he added, showed that "in direct contrast to what some would falsely claim about the use of these cards ... at least two of the mayor's three detail officers never used them for anything. One never used them at all and one used them very seldom over a three-year span, which would seem to contradict anybody’s statement to the contrary."

As to the allegations that time-cards were falsified, Zober continued, "The mayor doesn’t set policy as to time cards within a department."

Zober said the mayor had nothing to do with setting up the account, nor issuing the debit cards. That was done by Harper, although "clearly it wasn't intended, even it was done in a way that the chief maybe shouldn’t have done it, it wasn’t intended with any ill-will, at least with the respect to the two officers."

Zober told reporters that the administration has a copy of an unsigned letter from the chief establishing the IPF account.

"We understand there to be eight cards issued ... at Police Chief Harper’s request," Zober said. "There’s a letter out there somewhere. We're trying to find a signed copy of that letter: We have an unsigned copy where he makes a request for eight cards."

Aside from the three officers assigned to the mayor, cards were issued to Harper, Deputy Chief Paul Donaldson, Assistant Chief Maurita Bryant, clerk Tammy Davis and Sandy Ganster, who ran the finance office. Bryant and Donaldson have told reporters they had never even seen the cards taken out in their names.

Zober and city solicitor Dan Regan say they tried to get copies of all of the transactions related to the credit union account, but have been unable to do so because those cards were in other people's names. (They were able to receive Scuilli and Gauntner's cards because those officers requested them.) Zober and Regan said they are examining their legal options to get the documents.

When asked how they know that Crawford’s statements wouldn’t show anything potentially inappropriate, Zober replied, "We don’t know that, and we wish we could get our hands on them to know that. But looking at these two statements, unless Fred Crawford was given some special kind of powers or authorities that the other two didn't — and unless any activity like that stopped whenever Fred Crawford's employment stopped, that would seem to indicate that it's unlikely.

"But we’re doing what we can to get those records as well."

Activist Scholars Discuss “History From Below”