A coalition of groups ranging from the American Civil Liberties Union to the Black Political Empowerment Project today called for community input in the search for a new police chief and the qualities/agenda he or she should possess.

"This is a healing moment," said Tim Stevens, executive director of B-PEP, citing recent turmoil in the department as the result of a federal investigation into potentially fraudulent spending accounts. "This is an opportunity for us to move forward and hopefully create a future with regard to police-community relations that will hopefully be at a level we've never seen before."

Vic Walczak, legal director of ACLU-PA, said it was time to address leadership failures in the bureau that has led to high-profile incidents involving police officers — such as using plainclothes details known as "99 cars;" five off-duty officers shooting at a fleeing vehicle in the South Side; the beating of Homewood teenager Jordan Miles and other "countless crazy off-duty behavior."

"The worst part is not these incidents occurred," Walczak said. "But who's taking responsibility — not only for the incidents but standing up to say they won't happen again?" 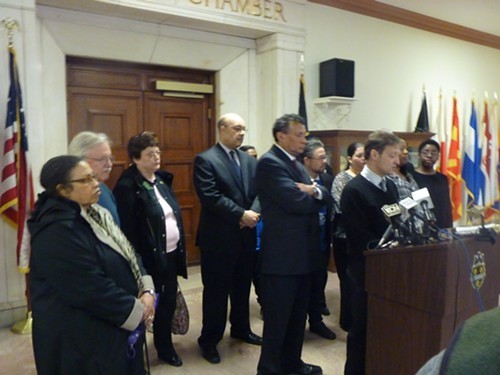 Walczak said the ACLU and community groups were calling on Mayor Luke Ravenstahl and mayoral candidates Bill Peduto and Michael Lamb to pledge to comply with bureau management guidelines contained in the 1997 consent decree that led to federal oversight of the department until 2002; and pledge to diversify the force by race and gender.

"The police are becoming increasingly white and increasingly male," Walczak warned. But he said the ACLU "wasn't quite there" in taking the city back to court which led to the former consent decree.

Hazel Blackman, regional council member with Action United, said the lack of diversity leads to distrust within the black community. "We feel targeted because of the color of our skin," she says. "We have a problem of a trust."

The groups invited Ravenstahl, Peduto, Lamb and the public to participate in a public hearing on the matter that they say is scheduled for next Wednesday at 1 p.m. (though the meeting hasn't been confirmed yet by the City Clerk's office.)

Ravenstahl appointed Regina McDonald as interim chief, and said at a press conference last week he would not be looking within the current department for a replacement.

City councilor Ricky Burgess, who also spoke at the press conference, said he would not confirm any appointment that came from within the department. Burgess said he would be looking at a chief's specific attributes and administrative agenda for whether they were qualified and would improve relations within the community.

"The best way to improve public safety," he said, "is to improve community confidence."

Heads Up: Morning headlines for Feb. 27