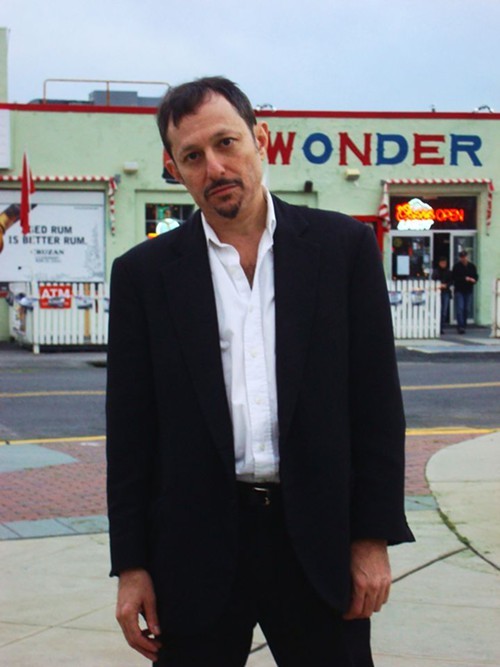 In the paper that comes out today, we ran a short version of my interview with Reid Paley, the onetime leader of Pittsburgh's The Five, who's now best known for his work with his eponymous trio and with Paley and Francis, his duo with Black Francis of The Pixies. Here's a less-abridged version of our talk. The show at Club Cafe on Tue., Feb. 12 is now sold out; see below for other dates on the tour.

What was the impetus for this short tour?

Oh, I don’t know what’s going on — it’s not my tour! It’s Charles’ tour. I think he’s going to be doing a little bit of recording in Nashville, and we might do some as well.

Have you been doing more writing together as a pair? I understand that the last record was written very quickly, before recording.

Yeah — we just spent three short days here writing, then — we normally don’t break it up like that, but this time we came up with the music together, then kind of split the lyrics. We each took five, then came back to Nashville to put it together. Which I think is a good thing. To be able to do something that I think is good, that quickly. It’s not like we weren’t paying attention, nor were we hurried. We’re just motherfuckers. We’re fast. I realize we live in a world where, engineers, in a studio, if you walk in and intend to play a song all the way through, they kind of look up and their eyes start to glow. Generally, people go in, [makes guitar-riff sound], loop that, it sounds like crap. I’m not a Luddite, and I’m not anti-digital, but one of the problems with digital is that it’s kind of reduced music — Jaron Lanier said that — the reason vinyl sounds so great is it’s a physical process. There are grooves, there are squiggles in the grooves, the vibration is picked up and amplified, and you’re hearing a thing. It’s like life; it’s how your eyes see things. Whereas digital is kind of like watching a movie, where your eyes are extrapolating between the 24 frames per second. Music is now a series of beeps, if you look at it closely.

But yeah, we did it pretty quick, not because we don’t care; not because we’re being arrogant; because sometimes there’s not much time allotted and you do what you can and sometimes it works.

Was there trepidation about being two guys known as strong songwriters, working together in this way?

I think collaborating is a pretty difficult thing. Sometimes it works, sometimes it doesn’t. We’ve known each other for ages; we actually started writing together about 10 years ago. It started as a lark; we threw together a song. We had telephone conversations; we’d sit there and play for each other over the phone. And that was a song he recorded on Honeycomb, called “Another Velvet Nightmare.” And we wrote a number of songs together. It’s just a thing — whenever he’s got time. He’s got certain other commitments, in terms of family and … another band. He does a lot of stuff. When there’s time, we do this stuff. This time, we’ll see what we can write on the way down to Nashville.

Did you guys meet way back when you were in Boston?

Back in the stone age when dinosaurs roamed the earth and men didn’t exist and mammals were tiny and rat-like, giant eyes. Way, way before, when your parents were small children. This, Andy, is when we met. It was a long time ago, it was the Boston music scene. I had a band in Pittsburgh for a while, then we moved to Boston — the technology wasn’t what it is now; [in Pittsburgh,] you were basically living way in the inner reaches of a cave, to music-industry people. So we ended up going to Boston, and in the Boston music scene we did pretty well. We were weekend headliners. And at one point somebody put this band I’d never heard of on the bill. And I walked in and there he was, and that was how we met. That was The Pixies. And I watched them and said “Hey, this is a really fucking good band!”

It worked out for them.

Yeah, and it’s great — it’s a rare thing when something good and something smart gets recognized.

A lot of critics refer to you as underappreciated, a hidden gem. Why do you think that is?

I don’t’ know! I’m not 20 years old; I’m not a little girl with sexy librarian glasses and a voice that sounds like I took the wrong cold medicine … I don’ tknow! My vocals are a little aggressive, but not that aggressive — they’re nowhere near as aggressive as, like, Norwegian death metal. The problem is, if you’re not trendy, or if you don’t’ identify with a genre — I think my life would be a hell of a lot easier if I just put on a cowboy hat and decided I was a country-western guy, or dressed “x” way and became “x” — you know, if you go to any town there are a bunch of hardcore kids with shaved heads who dance in a circle, and if you’re a psychedelic band you go to any town and there’s a certain amount of vaguely effeminate guys with paisley shirts and pointy shoes and bowl haircuts and semi-attractive girls in short dresses who — you know what I mean? There’s always a crowd for a genre band; I’m not a genre guy. So consequently — I don’t think I’m that weird, I’m not doing anything that crazy or artsy or new. I was thinking recently about something that David Thomas of Pere Ubu had said; he had written, recalling something the guitar player Tom Herman had said, which was roughly, “If you can’t make it with one chord and the will to rock, then you should look for another line of work.”

Speaking of aggressive vocals — are you starting to feel the long-term effects of growling so much for the past thirty years?

No … the thing is, I’m not straining my voice, I’m not screaming. It’s just a way to sing, a way that comes naturally to me. It depends, as you change as a person, your style kind of morphs. It’s still the same spine, but slightly different. The thing that’s hard on your voice: Talking with people in a club with loud music. That’s hard. But just screaming every night, or appearing to scream, if you’re doing it right … I always liked the old blues shouters. I learned by trial-and-error over the years.

What brought you to Pittsburgh back when you lived here?

I came to Pittsburgh to start school, then dropped out and started a band. And punk rock happened. That was it.

Are any of your old bandmates still around Pittsburgh?

Of course! You’ve got Tom Moran, who’s one of the world’s best guitar players, who’s doing oud stuff. And a bunch of other stuff. He’s master of all things stringed.

Anything in particular that you like to check out when you come into town?

I generally don’t have a lot of time, but I’m still mourning the loss of that giant mahogany, confessional-esque kind of booths at the Squirrel Cage. I showed up many years ago and they were gone; they had those laminate, Eat ’n’ Park style booths now. I loved those booths! They were private! You could fuck in them if you wanted! They were amazing. So cool. So womb-like.

Do you have any new solo stuff on the docket?

I’ve got an album that’s half-recorded from about a year and a half ago. There are always songs, it’s just a matter of — well, this time really I have no excuse; it’ll have a home on Charles’s label, The Bureau, the next Trio album. I just need to finish it. Who knows, maybe I’ll do a Kickstarter thing or whatever. People are like, “When’s the next album coming out?” and I always say the same thing: Like everything, sadly, it’s always a matter of money. If it weren’t a matter of money, I’d have a new album out every eight to eleven months. For the past 15 years. It’s not that I’m out of songs. I love it when people say, “Heyyyy, this is something you can write a song about!” Well, thank you. Thank you. I really don’t have any subject material. I’ve not lived a life, nor have I paid attention. So I’ll write that one down! “Go write your own fucking song!” Hah!

Heads Up: Morning headlines for Feb. 6