Pennsylvania viewers of the new Matt Damon flick on natural gas drilling, Promised Land, may notice a different kind of preview at their theater this weekend that's not touting a new romantic comedy or gun-filled melee. A pro-drilling group has launched an ad campaign to refute the film's portrayal of the industry and the environmental impacts associated with drilling.

Pro-drilling group the Marcellus Shale Coalition announced today it is going to engage with the public to disseminate natural gas facts that are counter to the film's depiction by airing 15-second ads in theaters.

In the brief ad, a voice over states: "Many Pennsylvanians have questions about natural gas production. We understand that, so the Marcellus Shale Coalition created an online platform to ensure these questions are answered with straightforward facts. Please visit learnaboutshale.org to get the facts about natural gas development." 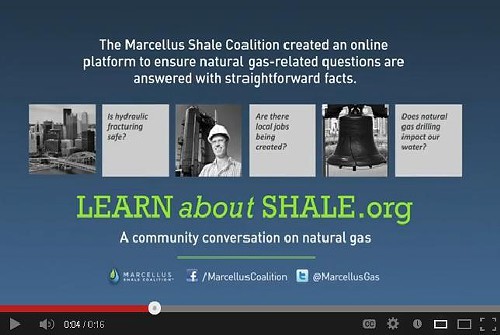 About 40 theaters statewide will run the ad, including some in Pittsburgh, according to the MSC. In a press release, the coalition states it's using theaters and social media to "respond to the work of fiction with real facts and responsible conversation around the issue of natural gas development."

At the top of a document entitled "What They're Saying About Promised Land" — in reference to media reports on the film — reads this:

" FACT: This film is purely a work of fiction and is not reflective of the work our industry undertakes, all done within an aggressive and effective regulatory framework. Our focus remains on creating even more American jobs, safely producing our abundant, clean-burning, domestic natural gas resources, revitalizing rural communities and our nation’s manufacturing base, and most importantly, doing it in a way that is safe. We live and raise our families in these communities, and have an unmatched commitment to protecting our air, water and environment."

Check out the movie this weekend and let us know what you think. Local showtimes can be found here.