Heads Up: Morning headlines for Dec. 7

Out Philadelphia way, there's lots of buzz about how Allyson Schwartz may be gearing up to be the Democratic nominee who challenges Tom Corbett in the 2014 gubernatorial election. I've always been kinda agnostic on her, in part because she's taken up the Jason Altmire (i.e. the "wrong") position on some key elements of healthcare reform. But we may as well start getting to know her a little better: She's a woman, from Philadelphia, with proven fundraising ability. Which would be pretty close to a trifecta at this early stage of the game.

Speaking of Corbett, if he's got political ambitions beyond Harrisburg, he may have just dented them with this interview with Bloomberg News. The ironic moment comes at about the six-minute mark, where Corbett is asked whether Washington must raise taxes in order to avert the "fiscal cliff." Corbett's answer is yes ... even though many D.C. Republicans oppose tax hikes because they made the same "no new taxes" pledge that he did.

Preservationists ponder what they did wrong during the debate over staving the Civic Arena. Preservationist Peter Margittai says it would have helped to be "more proactive" and worked with "the organizations that have the most say in the destiny of a lot of these buildings at an earlier point in the process." Also, maybe find buildings that haven't inspired such ambivalence in the half-century they've existed.

Sure, renaming the 16th Street Bridge after famed historian David McCullough sounds like a good idea. But NOSTALGIA KILLS. Or at least that's what some city officials are concerned about: There's already a McCullough Street over in the North Side, and there's a chance that emergency responders might get confused about where they are going. Seems to me there's an easy solution here: Let the bridge have its new name, and rename McCullough Street "the 16th Street Bridge." PROBLEM SOLVED.

The film Promised Land isn't even out yet, but the natural-gas industry already hates it. The film, which was shot in western Pennsylvania and is apparently going to make drillers look like the bad guys, is being heaped with scorn from pro-industry front groups. Among other things, they've accused the film of not having an original plot. Actually, I think these guys might be onto something big here. For example, a City Paper investigation has revealed that the Lord of the Rings trilogy rips off its entire plot from some books by J.R.R. Tolkien! Meanwhile, the 1996 Gwyneth Paltrow vehicle Emma was really just a rehash of the 1995 Alicia Silverstone vehicle Clueless. Which itself was a retread of a early-1970s BBC miniseries titled ... Emma. And that miniseries was, in fact ... based on a book by Jane Austen. Hollywood's perfidy is like a hydrofractured natural-gas well -- once you start digging, there's no telling what you may bring to the surface.

WAS SHERMAN HEMSLEY A MARTYR FOR THE TRUTH? A reader speaks out 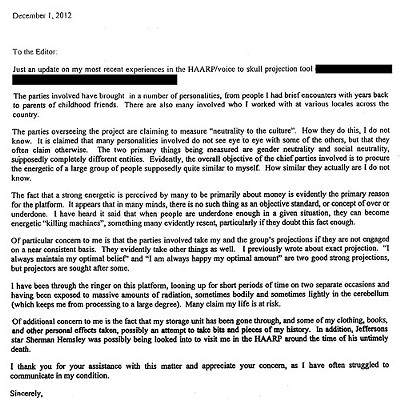