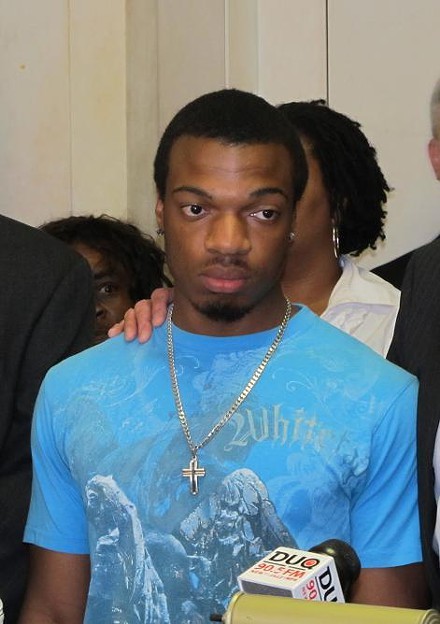 Attorneys for the three officers accused of beating then-CAPA High School student Jordan Miles in 2010 Homewood are opposing the young man’s attempts to use prior claims of misconduct against the officers in a second civil lawsuit. And despite Miles' request, they also oppose a new trial on claims of malicious prosecution.

Miles sued the city and officers Michael Saldutte, David Sisak and Richard Ewing following a civil trial last year that lasted several weeks, the jury, seven white members and one black member, found that the officers did not maliciously prosecute Miles, however they deadlocked on the more serious charges of false arrest and excessive force. Saldutte and Sisak are still employed with the city police department, however Ewing is now an officer in McCandless.

Miles was an 18-year-old CAPA High School student on Jan. 12, 2010 when he had an altercation with the three officers in his Homewood neighborhood. He says he was simply walking to his grandmother's home in Homewood when the officers approached him without identifying themselves. Thinking he was going to be robbed, Miles ran; he claims the police chased him down, beat him severely while pulling chunks of hair from his head.

The three officers claim they saw Miles skulking around a neighbor’s house at 11 p.m. on Jan. 12, 2010. They stopped him and identified themselves, they say. And they say Miles had a bulge in his jacket, acted like he had a gun and ran. They say he later assaulted Sisak and Saldutte and was the aggressor in the altercation, despite being outweighed by the officers’ combined weight of more than 600 pounds. Charges against him, however, were later dropped.

Late last month Miles’ attorneys asked for a new trial and they want the judge to allow testimony regarding past conduct by the officers that they say is similar to the Miles’ situation. They also want the judge to allow the new trial to include the already-disposed of malicious prosecution charge. Miles attorneys claim the judge erred in not instructing the jury that they could find the officers acted with malice if they believe they didn’t have probable cause to stop him.

Attorneys also claimed that the officers’ past behavior could also go toward an argument of malice. They sought to introduce the evidence at the first trial, however, the judge ruled that it would have been prejudicial to the officers.

“[E]vidence established that the defendants were under close scrutiny and faced potential discipline because of their prior misconduct including unnecessarily aggressive tactics and frequent inaccurate reports regarding probable cause, seizures and use of force,” wrote Miles attorney J. Kerrington Lewis. “…Based on this evidence, a jury could easily have concluded that the false charges were not the result of defendants’ mistaken belief that he had committed a crime, but were, in fact, filed maliciously.”

Lewis also pointed to several statements made by Police Commander RaShall Brackney who once supervised the men.

According to Brackney’s deposition cited in Lewis’ brief:

“...[T]here were several accidents that he was in in which I investigated the accidents where I did not believe Officer Ewing to be truthful in his actions, as well as in his reporting, and that I recommended discipline, retraining and things like that...and I would often make comments that he was untruthful, that he tended not to tell the truth, and that he also was not very he often would not be able to justify his searches based on the paperwork that he was submitting to me. So as I was looking at that, I was not very comfortable with his reasonable suspicion to stop people…”

Lewis also wrote that Miles should be allowed to present the testimony of a man named Lamar Johnson who describes being involved in a December 2009 assault similar to and less than a month before the one that Miles says occurred. Johnson had already filed a complaint with the city’s Office of Municipal Investigation before the Miles incident.

According to Lewis, Johnson would have testified that the officers, “jumped out of an unmarked car without identifying themselves as police officers and without provocation or basis assaulted him, including throwing him to the ground and choking him. The defendants filed a report in which they sought to justify their unreasonable use of force based on verbiage virtually identical to that used to justify the force against Miles. The defendants falsely claimed that: 1) Johnson had his hand in his pocket, 2) his right coat pocket hung lower than the left and 3) the pocket bounced off of his body as he walked and that 4) Johnson bladed by keeping his body facing away from the officers. As happened with Jordan Miles, however, no weapon or contraband was found. Nor was any object produced from the pocket which supported their alleged observations.”

Lewis says the information is admissible for reasons such “such as proving motive, opportunity, intent, preparation, plan, knowledge, identity, absence of mistake, or lack of accident.”

“The probative value of this evidence far outweighed any prejudicial impact,” Lewis wrote, “particularly where the defendants’ improper motive and malicious intent was an essential element of plaintiff’s case. Refusal to permit the evidence essentially denied plaintiff the opportunity to prove to the jury this critical element of his malicious prosecution claim.”

But attorneys for the officers say not so fast and claim the law is more on their side than Miles’.

“The Thrd Circuit has held that evidence concerning a police officer’s disciplinary history, especially incidents with very little relevance to the matter at hand, must be excluded when there is a danger of “harassment, prejudice, or confusion of the issues,” attorneys Bryan Campbell, Bob Leight and James Wymard wrote in a Nov. 8 filing. “Further, use of evidence concerning an officer’s disciplinary history is an attempt to insinuate, if not prove, that the defendant officer must have acted in accordance with the same actions in the pending case.”

In regard to the Brackney testimony, attorneys claim she was not the officers’ supervisor at the time of the Miles’ incident and “therefore her testimony would not have constituted improper character evidence and the court properly excluded it.”

And in the case of Lamar Johnson, attorneys claim his testimony should not be admitted because the OMI found his case to be “unfounded.” All of the evidence, attorneys say “would severely prejudice the … officers.

Miles, attorneys say, is attempting “to obtain a verdict on improper character evidence in the form of an argument that if others have complained about these officers, then they must have done something wrong.”

Heads Up: Morning headlines for Nov. 13