State GOP refuses to get the picture | Blogh

State GOP refuses to get the picture

Say what you will about Republicans, but you can always count on them to be of strong moral fiber, and to stand up for the rights of small business.

Unless, of course, they really need a picture of a Democratic opponent for an attack ad.

On Tuesday, we told you about how the state Republican Party, acting on behalf of state Sen. Elder Vogel, selectively quoted from a City Paper story to attack Democratic challenger Kimberly Villella. But on Wednesday, a new mailer wound up in voters' mailboxes. This time, they left our story alone — but lifted our photo instead. Under the headline "The Choice is Clear" is a photo of Villella that we took and published in our Sept. 26 issue.

There's no doubt that the photos are the same, right down to the woman in the background, pushing a shopping cart down Merchant Street in Ambridge. And to be clear, the state Republicans never asked us for permission to run the image. 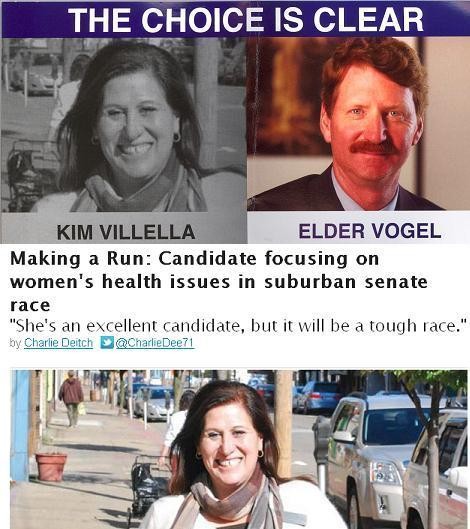 State Republicans haven't been alone in playing fast and loose with other people's intellectual property this year. For example, a mayoral candidate in San Diego had to pay a photographer a couple thousand bucks for using his pics without permission or payment. President Obama was asked by the creators of Sesame Street to remove its characters from his advertisements.

But we thought if anyone would understand the importance of protecting property rights, it would be the GOP. What's next? Occupying Wall Street?

And how would you guys like it if we started campaigning on such GOP "accomplishments" as stripping the state budget of a program to send a few bucks each month to the state's neediest? Or if we started trumpeting our advocacy of onerous restrictions on abortion providers, or absurd gun laws?

We're looking at some legal options, but in the meantime, we might be willing to look the other way if the GOP makes a sizable donation to Planned Parenthood on our behalf, or supports a worthy organization like the Thomas Merton Center. If you're going to lift our photographs, you ought to help yourself to a little of our ideology too.