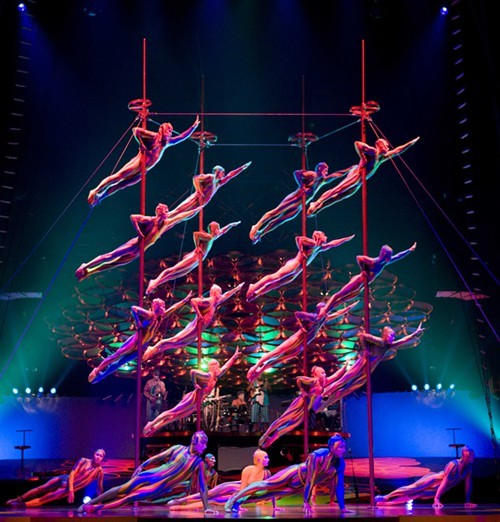 Saltimbanco is Cirque du Soleil’s longest-touring show, playing for seven performances at Pittsburgh’s Petersen Events Center. I caught the opening night on Thursday. With its breathtaking stunts, silly clowns, elaborate costumes and music combined in a general surreal spectacle, the show fulfilled all expectations of the troupe with eerie precision.

In Hard Times, Charles Dickens used the circus to represent the fanciful alternative to the world of facts and industry; to the machine. In Cirque du Soleil it seems the metaphors have merged. They create razzle-dazzle machines of entertainment in which everything is choreographed to smooth perfection. And with 5,000 employees, 20 different shows and an audience of millions worldwide, the Quebec-based troupe is seemingly unstoppable.

Utter reliability shouldn’t be a problem for a show like Saltimbanco, in which people unfurl from ropes tied fifty feet in the air and somersault off swinging platforms to be caught by human towers. But it does rob these fantastic feats of suspense or a sense of the performer's personalities. The possibility the bungee swingers, trapezists, and jugglers could screw up seems more remarkable than the fact that they don’t. In its 20 years of touring Saltimbanco is a victim of its own success.

Moreover many of the acts are over-saturated. The mind-bending "Cane Balancing" act or multi-person "Chinese Poles" come accompanied by booming Muzak — played live but sounding thoroughly artificial — and masked clowns faffing around in the background. It’s like watching the Olympic gymnastics final on your smart phone during a pop concert. There are some amazing displays of human ability in front of you, if only you weren’t too stimulated to concentrate on them.

The most effective acts in Saltimbanco are also the most stripped back. A drumming and whip-cracking duo in the "Boleadores" act create a vivid tango with minimal window dressing, and the schoolboy-attired solo clown "Eddie" is the star of the evening.

Using no more than mime, his personableness and beat-boxing skills, Eddie mocks up a spaghetti western standoff with an audience member. And what I’ll remember the most from Saltimbanco is when he flushed himself down the toilet, despite the fact most of the visuals of the scenario took place in my mind.

Heads Up: Morning headlines for Oct. 19

So much for the liberal media? Local cable provider offers Obama 2016 for free