Obama Volunteers Have Different Reasons for Backing the President | Blogh

Obama Volunteers Have Different Reasons for Backing the President 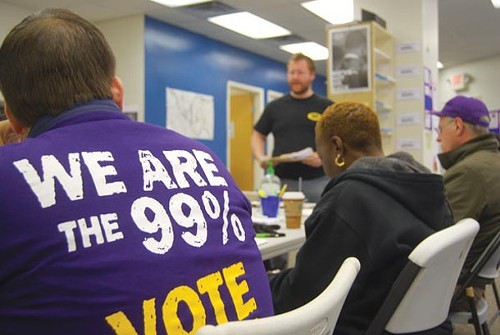 While preparing this week’s story on President Obama’s grassroots campaign effort, staff writer Lauren Daley and I talked to a lot of neighborhood volunteers about the reasons they decided to get involved in the campaign.

Two of those volunteers had motivation stemming from personal experiences that strike at the heart of two of the biggest issues in the upcoming election — healthcare and women’s health issues.

Keller of Dormont supported Obama in 2008, but was volunteering for the first time. He got involved because he says Mitt Romney and Paul Ryan’s plan for healthcare “is so frightening to me.” Keller supports Obama’s personal care act because. “I know what I’m getting, it’s all laid out for me.”

The healthcare debate strikes a personal chord with Keller. After his mother beat melanoma in the 1990s, she was considered to have a pre-existing condition. When the disease returned, her condition wasn’t covered.

After his mother passed away, Keller’s family was buried in medical bills.

“We spent so much money on chemo and medicine even though we had health insurance,” he recalls.

Phillips’ story also involves his mother. He volunteered for the Obama campaign four years ago when he was still a philosophy student at Pitt. Now, four years later, he’s a Pitt grad and despite working 40 to 45 hours per week, he still spends 15 to 16 hours a week volunteering for the Obama campaign because he knows that if some Republican politicians had their way he wouldn’t be here today.

Before either Phillips or his younger sister was born, his mother had a difficult pregnancy and had to make the choice to either terminate the pregnancy or lose her own life. If some Republicans had their way, abortion would not have been an available option, he says.

“A few years ago there at least seemed to be some flexibility from that party, at least in certain circumstances, where abortion could be appropriate,” Phillips says. “But now they say, “no, never, period.”

Pro-lifers are famous for talking about all of the children that have been aborted that could have grown up to become President or Tim Tebow. But, the argument, Phillips says, is not that simple.

“That’s why I got involved.”