Here we go: Hundreds of 20-somethings arrive next week | Blogh 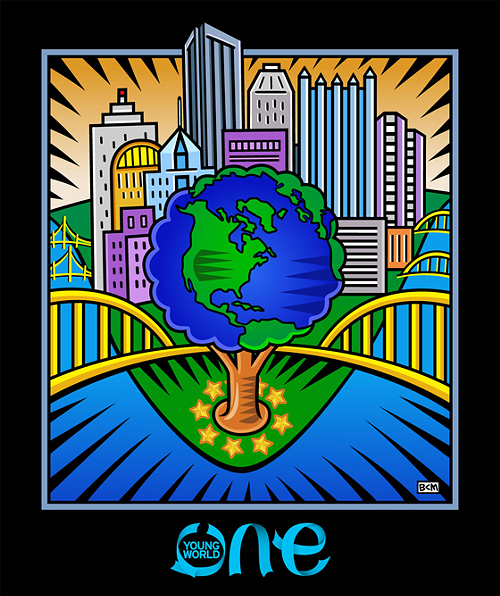 In noting what Pittsburghers could do to help welcome the roughly 1,500 20-something-year-olds who start arriving next Thursday, Holzer said "The most important thing we can do is be kind to ourselves."

"Think about young. And think about Pittsburgh," he said, in describing the kind of attention the event was bringing to the city. "That would not have been said several years ago."

The third summit of its kind (the first was held in London in 2010; the second in Zurich in 2011), will bring an eclectic mix of celebrities into town, including former President Bill Clinton, Twitter co-founder Jack Dorsey, Huffington Post founder Arianna Huffington, Pakistani poet and activist Fatima Bhutto, and celebrity chef Jamie Oliver.

According to the One Young World Pittsburgh site:

The four-day Summit will serve as a platform for delegates, supported by high-profile counselors, to address and identify solutions to the same issues that world leaders tackle every day — including global business and health, education and sustainable development, unemployment, the role of government versus global business, leadership and governance and social business.

Organizers of the summit also noted that the event will not be contained just within the walls of the David L. Lawrence Convention Center. Friday's agenda includes a Downtown gallery crawl in the Cultural District and the closing of the Roberto Clemente Bridge for a "bridge party."

Dozens of sessions Saturday will also be held at locations throughout the city's neighborhoods (even on the North Side, one of the organizers, Steven Sokol, particularly noted), folllowed by more than 100 home dinners, where attendees of the summit (who hail from about 190 different countries) will break bread with real Pittsburghers.

"They've really made interactions with Pittsburghers a priority," said Mayor Luke Ravenstahl. "It seems like these folks are going to get a real Pittsburgh experience."

Obama Volunteers Have Different Reasons for Backing the President

Speaking of One Young World , Pittsburgh