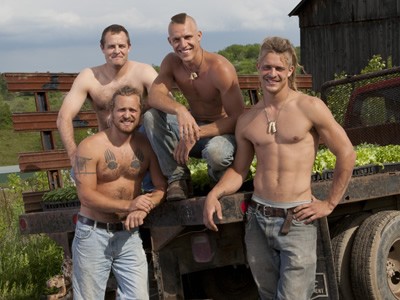 Freedom Farms, in Butler County, is the focus of a new reality show, Farm Kings, on the GAC cable channel. (That’s Great American Country, for those of you who don’t spend all day watching country-music videos.) New episodes premiere Thursday nights at 9 p.m. with repeats throughout the week.

At the farm, run by the King family, they raise corn, chickens, peppers, flowers and, most notably, strapping young men. Don’t take my word for it: The introductory show, “Meet the Kings,” splits its time between showing the family members (mom, nine sons and one daughter) at work planting, cooking, packaging, selling — and showing a couple of the King lads shirtless. (For the record, these are dudes who look good without a shirt.)

Sometimes they’re working shirtless — farming is tough physical labor — but other times they’re just lounging around bare-chested in a barn talking about farming. The show introduces two of the brothers as they casually doff their shirts. The title image is four Kings standing shirtless. The brothers generously wrestle shirtless. One King works the farmers’ market shirtless, claiming (probably correctly) that it helps sales.

The intro episode didn’t set up much conflict, or suggest what a series arc might be. The family emphasizes in rather generic statements that farming is hard work, but the show so far feels more like a “Hot Farmers” calendar come to life. But if it leads more viewers to appreciate where their food comes from — or to work out more before tackling their own gardens sans shirt — it can’t be a bad thing.