Two of Pittsburgh’s best-known political cartoonists team up on Sunday to talk about its most legendary.
Pittsburgh Post-Gazette cartoonist Rob Rogers and former P-G cartoonist Tim Menees will discuss the craft and impact of Cy Hungerford at the Carnegie Library’s main branch. The event is free.
Hungerford was Pittsburgh’s top political cartoonist from 1927 through 1977. The Indiana native joined the Pittsburgh Sun in 1912 and drew for the P-G starting in 1927. He was known for his gentle style. “You can’t preach. Bitterness and viciousness defeat their own purpose. Make people smile and think while they’re smiling,” he was once quoted as saying in the P-G. Hungerford died in 1983. Here's one of his pieces from during the Johnson administration. 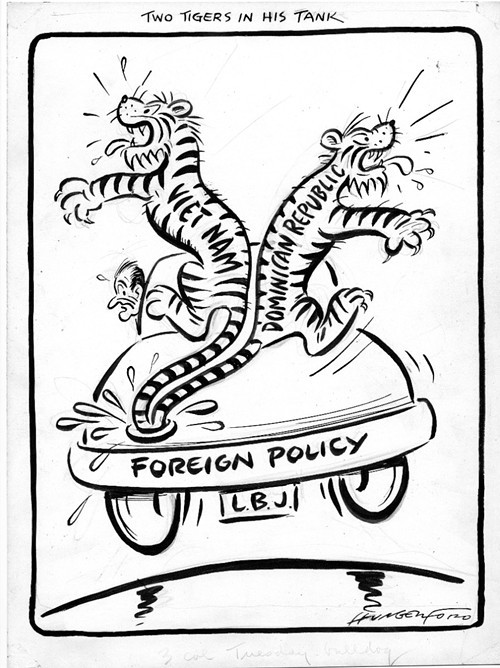 "Following in the Footsteps of Hungerford," part of the Allegheny Regional Asset District’s RADical Days lineup of free events, takes place in the library’s Quiet Reading Room.
The 2-4:30 p.m. talk accompanies a gallery exhibit drawn from the library’s extensive Hungerford collection. The exhibit is up through Oct. 6.
For more information, call 412-622-3151 or email newandfeatured@carnegielibrary.org

Sexist cartoons in the Post-Gazette draw ire from Pittsburghers