Heads Up: Morning headlines for Aug. 31

Story of the day: In another Oscar-worthy performance, Clint Eastwood has apparently been merely pretending to be a Republican all these years -- so that, at a crucial moment, he could deliver a speech that makes the entire Republican National Convention a global laughingstock, thereby stealing the nominee's thunder. I knew the guy was good, but I didn't realize he was good enough to turn his entire life into a Joaquin Phoenix-like mockumentary. We can only hope this prompts a critical reappraisal of Eastwood's work in Space Cowboys.

A judicial discipline panel rules that Supreme Court Justice Joan Orie Melvin should not be paid as she prepares for trial on allegations that she forced taxpayer-supported staff to do political work. In a 5-1 ruling, the Court of Judicial Discipline variously accused her of conduct that was "egregious" and amounted to "bullying" that was "relentless." It also suggested she was "single-mindedly occupied with achieving personal aggrandizement," and that her claims of innocence "test the patience of the court." Other than that, though, seems like her defense is going really well.

A few days back, we pointed you to this WTAE story about home caregivers who were awaiting payment from a local business, Christian Financial Management. Turns out that, according to today's Philadelphia Inquirer, those complaints go way beyond Pittsburgh and involve glitches resulting from a change in the way the state reimburses for home-health services. Democrats and Republicans alike are said to be outraged.

A developer who tore down two historic buildings at the Iron City brewery gets hit with $20,000 in fines by district judge Tony Ceoffe.

Finally, you may have heard that Jeanne Clark, that notable shrinking violet, publicly called out Mayor Luke Ravenstahl for allegedly castigating her during the recent "Cookie Cruise" fundraiser held in memory of the late Bob O'Connor. Clark and Ravenstahl traded words over the mayor's decision to promote the ever-controversial George Trosky to a top position in the city's police bureau. Tribune-Review columnist Eric Heyl reports that the mayor's office doesn't deny a confrontation happened. Their position: "She's crazy." OK, so let's deduct several points from Ravenstahl for a lack of class. On the other hand, it's not like Clark is going to be intimidated. And the altercation probably spiced up the proceedings considerably. Had I known something that interesting was going to happen, I might have shown up. 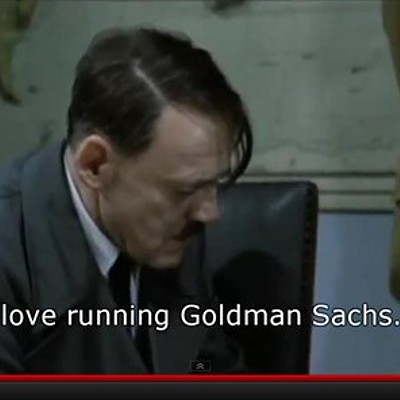