Is This Chair Taken?

Today, everybody is talking about chairs that may or may not hold invisible people. Here's a local one to contemplate. 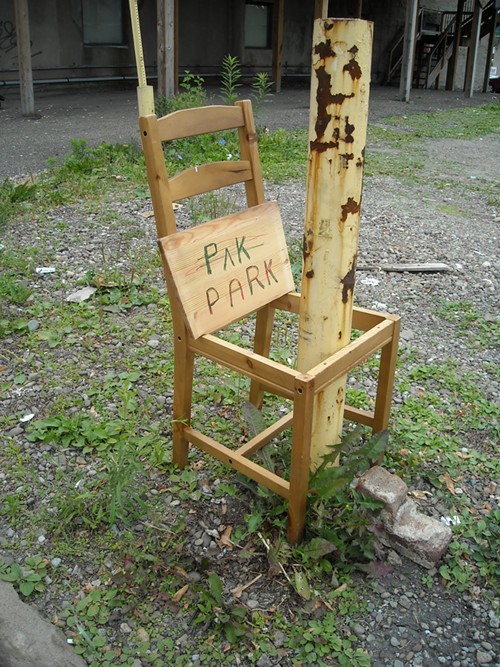 A student from Fort Lauderdale revived an online petition and promised there would be protests. Many other petitions on the website change.org also popped up. Other students took to Twitter to lodge complaints and there's even a Facebook page. But someone unhappy with the company's decision made a parody video using a clip of an Angry Adolph Hitler portrayed in the 2004 German film Downfall, which dramatizes the end of Hitler’s regime.

The individual, using the moniker “myfriendlycrow,” used subtitles to express displeasure at EDMC’s decision to sack the employees, many of whom are full-time professors. In the video, Hitler represents Goldman Sachs, the banking giant that owns the majority stake in the for-profit education company. Other members of the Third Reich are meant to represent EDMC executives and admission counselors.

I could give a blow-by-blow accounting of it here, but it might be something best left to your own viewing of the video below:

Heads Up: Morning headlines for Aug. 31

Story of the day: In another Oscar-worthy performance, Clint Eastwood has apparently been merely pretending to be a Republican all these years -- so that, at a crucial moment, he could deliver a speech that makes the entire Republican National Convention a global laughingstock, thereby stealing the nominee's thunder. I knew the guy was good, but I didn't realize he was good enough to turn his entire life into a Joaquin Phoenix-like mockumentary. We can only hope this prompts a critical reappraisal of Eastwood's work in Space Cowboys.

A judicial discipline panel rules that Supreme Court Justice Joan Orie Melvin should not be paid as she prepares for trial on allegations that she forced taxpayer-supported staff to do political work. In a 5-1 ruling, the Court of Judicial Discipline variously accused her of conduct that was "egregious" and amounted to "bullying" that was "relentless." It also suggested she was "single-mindedly occupied with achieving personal aggrandizement," and that her claims of innocence "test the patience of the court." Other than that, though, seems like her defense is going really well.

A few days back, we pointed you to this WTAE story about home caregivers who were awaiting payment from a local business, Christian Financial Management. Turns out that, according to today's Philadelphia Inquirer, those complaints go way beyond Pittsburgh and involve glitches resulting from a change in the way the state reimburses for home-health services. Democrats and Republicans alike are said to be outraged.

A developer who tore down two historic buildings at the Iron City brewery gets hit with $20,000 in fines by district judge Tony Ceoffe.

Finally, you may have heard that Jeanne Clark, that notable shrinking violet, publicly called out Mayor Luke Ravenstahl for allegedly castigating her during the recent "Cookie Cruise" fundraiser held in memory of the late Bob O'Connor. Clark and Ravenstahl traded words over the mayor's decision to promote the ever-controversial George Trosky to a top position in the city's police bureau. Tribune-Review columnist Eric Heyl reports that the mayor's office doesn't deny a confrontation happened. Their position: "She's crazy." OK, so let's deduct several points from Ravenstahl for a lack of class. On the other hand, it's not like Clark is going to be intimidated. And the altercation probably spiced up the proceedings considerably. Had I known something that interesting was going to happen, I might have shown up.

YERT: Your Environmental Road Trip, the 2011 feature by Mark Dixon and Ben Evans, has been acquired by First Run Features.

Even in the Internet era, it's HUGE for an indie feature, especially one shot on a shoestring, to get distribution. For more than a year, Evans and Dixon have been running around the country, showing the film themselves to grassroots groups and at colleges. Now there's a better chance of getting the doc into actual theaters (most likely art houses) with paying audiences. And it'll definitely help with the eventual DVD release.

YERT chronicles the year-long road trip to all 50 states taken by Dixon, Evans and Julie Dingman Evans (Ben's spouse) in 2007-08. With good humor accompanying earnest intentions, they went in search of solutions to our various environmental crises, from global warming to unsustainable agriculture.

Here's my first article on the project and the piece I wrote when YERT premiered locally, a year ago.

The trip started in Pittsburgh, where Julie and Ben were based at the time (they're performers who'd worked at City Theatre) and where Dixon still lives and remains active in the environmental community, even as the filmmakers continue promoting YERT. The First Run deal should definitely help.

Local Environmentalists Warn that Summer is Getting Too Hot Is climate change ruining summer? That's the question an outreach coordinator for the National Wildlife Federation had for Pittsburgh this morning, timing it with the release of a report by the national group, Ruined Summer: How Climate Change Scorched the Nation in 2012.

Gathered under the Roberto Clemente bridge in the morning sun Thursday with representatives from the local food industry, the environmental groups GASP and Penn Future and the recreational nonprofit Venture Outdoors, NWF's Ed Perry warned that high summer temperatures are the result of climate change, and are having an impact on recreational activities and local wildlife.

"This wacky weather we've been experiencing is going to become the new norm," he says.

Neil Stauffer, general manager of the Penn's Corner Farm Alliance, says farmers are noticing the effects of recent temperature fluctuations on the produce they grow.

"Obviously I'm not an expert and only have anecdotal evidence from what the farmers tell me .. [but] something's obviously changing, and a lot of us feel stumped," he says.

Perhaps befitting a campaign featuring two middle-aged dudes in corporate wear (with the occasional foray into dad jeans), goofy outfits on the floor of the Republican Convention have been few and far between this week. (Confidential to Condi: Girl, that is not your dress.)

But Tuesday night, as New Jersey Gov. Chris Christie was listing the people who "are the United States of America" (for the record: "entrepenuers, firefighters, teachers, farmers, veterans and factory workers, and everyone in between"), the cameras showed this guy. Wearing what looks like a modified Yeungling 12-pack box on his head.

Add "Pennsylvania-beer drinkers" to "everyone in between."

Heads Up: Morning headlines for Aug. 30

Hard times come again once more: The union-affiliated Keystone Research Center's 2012 "State of Working Pennsylvania" report is out, and the news is grim. "Over the last ... decade, from 2000 to 2010, for example, median four-person family income in Pennsylvania declined by $6,100 from its 2000 peak (of $82,818). During the short economic expansion from 2002 to the end of 2007, the top 1% of Pennsylvania taxpayers captured 54% of ALL income growth in Pennsylvania." And you can expect more of the same, says the KRC.

Could Asian Americans be the overlooked casualties of the state's Voter ID bill?

Protesters continue to denounce Gov. Tom Corbett's elimination of a program for the state's poor. (TRIGGER WARNING: The comments section of this story is likely to lead to elevated blood pressure and pupil dilation).

But let's not forget who the real victims are: Steelers stand-out Franco Harris is on a one-man crusade to soften the blow of sanctions against Penn State, his alma mater. Gee, if only there were some more vital cause to fight for ... some pressing event coming up in the next couple months, an event whose outcome might affect the future of the country. If only there were some way to advocate for a cause that might affect the very lives of students currently at Penn State, rather than he bragging rights of people who attended decades ago ... Well, never mind.

Attention social-media users: You might want to take a quick look at state House Bill 2249, which makes it a crime to impersonate someone else online. Does that mean parody Twitter accounts and the like could be affected? Backers of the bill say no; the crime specifies that impersonation is a crime if there's an intent to "deceive, harm, defraud, intimidate or threaten any person." But the ACLU has concerns, stemming from the fact that words like "harm" can be squishy. Keep your eye out.

Bonus read: Set aside some time for Matt Taibbi's takedown of Mitt Romney in Rolling Stone. I wouldn't say there's a ton of new reporting here, but as with a lot of Taibbi's work, while it doesn't break new ground, it is a harrowing look at the political and economic landscape. If you didn't realize what was at stake in this election before -- the mutation of the American economy into a Wall Street pachinko game -- you will now.

It's that time of the week: Time to take a look at crimes and misdemeanors that have taken place recently in the Pittsburgh suburbs, with the help of local Patch websites.

In Whitehall, a pet rabbit — with its cage — was stolen from someone's back porch, which basically proves that rabbits aren't very good guard dogs.

In Edgewood, several major stories: Power Wheels stolen from outside a home! Two Wendy's employees arguing with one another over money! A sick raccoon! (Was it or was it not the Edgewood raccoon from last week that evaded capture after breaking into a trash can?)

Hope everyone's safe out there. Anyone with any details — PB&J? Lunchables? Were there granola bars? — feel free to update us.

There's a lot of talk going on about the ACLU's lawsuit alleging discriminatory hiring practices at the Pittsburgh Bureau of Police. I have a column about it in today's issue, and the Post-Gazette editorial board opined on it as well.

Here's the thing that has been left out of the discussion so far: None of this is a surprise. Today's dismal hiring rates were set in motion more than 20 years ago, and just about everyone who was paying attention -- including the guy who made it happen -- saw what was coming.

In fact, as spelled out here yesterday, the lack of diversity will almost certainly get worse, because recent recruiting classes are less diverse than the roster of veterans they are being added to. So how did those veterans get on the force in the first place? And why is that no longer happening? That's what we look at below.

There's a lot of talk going on about the ACLU's lawsuit alleging discriminatory hiring practices at the Pittsburgh Bureau of Police. I have a column about it in today's issue, and the Post-Gazette editorial board opined on it as well.

Here's the thing that has been left out of the discussion so far: None of this is a surprise. Today's dismal hiring rates were set in motion more than 20 years ago, and just about everyone who was paying attention -- including the guy who made it happen -- saw what was coming.

In fact, as spelled out here yesterday, the lack of diversity will almost certainly get worse, because recent recruiting classes are less diverse than the roster of veterans they are being added to. So how did those veterans get on the force in the first place? And why is that no longer happening? That's what we look at below.