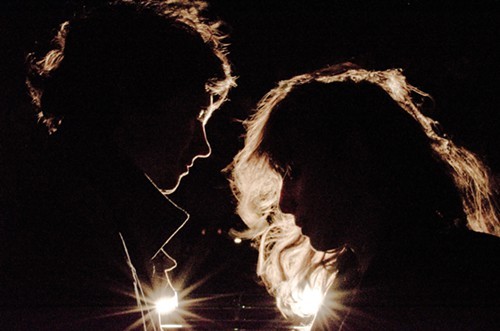 A couple weeks ago, I chatted on the phone with Alex Scally from Beach House. The band's show at Mr. Small's next week is sold out already, but I think the interview is worth checking out either way, I think, especially here in a version that's longer than what ran in the paper today.

Myth was put together largely on the road, touring after Teen Dream came out, right?

I wouldn't say "put together," but the genesis of a song, where the melody starts to come out, a lot of that did spring out during the sort of epic amount of touring we did after that record. You get frustrated on tour because you're playing the same stuff and you just want to make something new. This music is now old to you. A lot of energy springs from that frustration, I think.

Is it a challenge, as a writer, being out on the road, being homeless for a time?

I think if you were trying to put everything together it would be, it could be really challenging, but it's really natural — things are coming out of you because — I don't think anyone stops being creative on the road, they just don't have time. It's always bubbling up.

Listening to the new album, I feel like one thing that's surprising is that you've chosen to stay mainly with the same type of instrumentation as the past couple of albums —

It's strange, as a musician, I feel like I don't really understand half of what we've been told about this album. But there's a lot of stuff on this album that has never existed on our recordings before: Autoharp. Actual, live strings. A synthesizer: We've never used a synthesizer before! To the untrained ear, yeah, I think it's not new — but there's actually a ton of new stuff happening on this record. I don't know what to tell people; I think people are just hearing our songwriting. That's just who we are; we're never going to write songs differently than we write songs. It's who we are. So yes, in that respect, it's very much the same — but we're not a band that just goes after sounds. If we wanted to make an album that sounds like U2 songs, it'd be very easy to do. That's a certain thing that good musicians can do — I'm not saying "good musicians" like "we're good musicians," but we're trained musicians. I'm a trained musician; when I hear a guitar line by another artist, I can copy it. It takes like five minutes to learn what they did. Victoria is a classical pianist. We can play people's music. It takes five seconds. That's what they did in the VW commercial: They played our music. So it's — we're just playing who we are, and maybe someday we'll make an album, and people will say "Beach House made something that sounds different!" But we only do what we naturally do. We don't work from an intellectual way — we don't sit there and think what we're going to do next. We just do what we do. And we used so many instruments that we'd never used before, on this album, but I don't think that's what people hear.

I feel like, at least from my perspective, your albums tend to grow on people — I tend to like a Beach House album more with each listen. Do you think it’s because the complexity you’re referring to isn’t at the surface?

That’s another thing — I can tell a lot of people who are talking to us haven’t done that with the album. And I think that’s largely how we write. We have a little idea, and it’s a really exciting, cool thing. And then we kind of cover it up with another thing we find really exciting. Every song is meant to have multiple dimensions — here’s the surface, here’s the second layer, here’s the third layer. We, as we write it and as we play it, move through the layers. It’s very visual. So, you don’t expect everybody to get that. I think, more than Teen Dream, which, for us looking back it looks more like a dumbed-down record — I think we were just really excited to write some pop songs or something — this is much more like our earlier material in some ways. It takes longer for you to get there. But it’s all there. I honestly didn’t expect there to be as much positivity about this record as there is. I expected people to say, this record is — Where are the hits? Which people have said. But we never expected people to get what we’re doing. But we’re really happy when people say, "It’s the fifth time I listened to it when I got it." That’s our favorite kind of music where you go further and further and further with each listen. And that’s the experience; it’s not just a one-and-done Katy Perry song where you hear it once and you’re never going to get anything more out of it.

Does it worry you that the music press is on a short-term news cycle and perhaps people don’t get to put as much time as you’d like into listening before turning out copy?

I feel terrible for music reviewers! I can’t imagine how hard that job is. You have to listen to something — I mean, how much time do you really have? You have to review ten things a week, or five things a week? Even that is really difficult. It takes me weeks to really appreciate an album. And I feel bad just for music today, because I honestly feel like we might be in one of the best times for music ever, in terms of the amount of people making really interesting music, but we don’t have the capacity to experience it all. So much music is forgotten just because as a society, as a human, how much music can you listen to? In your iTunes, there’s five days of music or something. Everyone has that much music now, in their computer. And we don’t have the time or energy to properly consume it.

This album is marked, in the song titles and the aesthetic, the stuff surrounding the music, by a minimalism.

Yeah — I just think that that’s how we’re feeling. We don’t want to try to sell anything. Our whole feeling with this record is, can we just not try to sell it? Can we just try to have it exist? We want these songs to just exist and for people to experience them and not be overwhelmed by our personal image, by the artwork, — we’re trying to design it kind of like an exhibit in a museum where you go in and it’s a space where you can just exist with the work, and take it in properly, and not be bombarded by gimmicks. I don’t know if we did that properly, but that was our hope.

Is there an ideal way of listening to the album?

I think that’s different for everybody, but sonically, the record, the vinyl — not the colored or anything, because that actually takes the quality down a bit, but just the plain, black vinyl sounds insane. Because we recorded it all on tape, and everything is open and expansive when you listen to it on a nice record player and a nice stereo. I don’t want to be all audiophile-y, but that’s — sonically — the way it’s deepest. Not on headphones; listening to it out into a room, on vinyl. Sounds insane. It sounds about a million times better than an MP3 earbud. But in terms of locations, I mean — I haven’t listened to the record since before it came out, but when we were figuring out the mixes and everything, anything moving seems so perfect for it. When you’re in a car, a train. Anytime you can see movement.

Will Sandusky scandal take accountability measure off back burner?