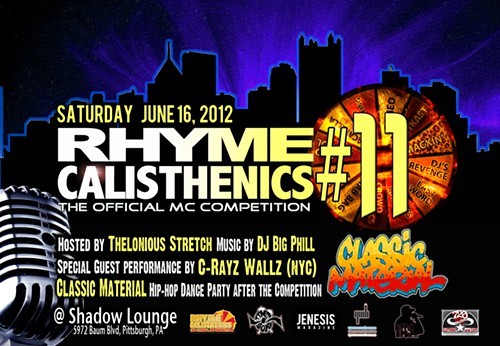 The eleventh installment of the Rhyme Calisthenics MC competition is set to happen Sat., June 16th at the Shadow Lounge in East Liberty. Hosted by Thelonious Stretch and DJ Big Phill, the homecoming competition will run in collaboration with the longest-running hip-hop dance party in Pittsburgh, Classic Material.

Eight MCs will compete for $200 cash, four hours of studio time and free stuff from Timebomb. RC will also feature performances from locals Zone and Shade Cobain & Co., along with New York City's C-Rayz Walz. $10 gets you in for the competition, which start at 10 p.m.