Altar Bar hosted a night of locally and nationally known talent last night as My Cardboard Spaceship Adventure and Punchline's Steve Soboslai shared the stage with Bayside's Anthony Raneri for an acoustic show. While each performer's style of music varied from the others, their sets complemented each other and flowed together well. 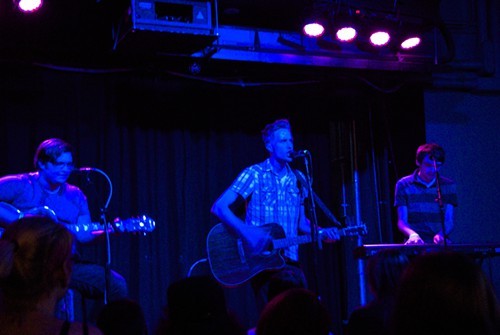 My Cardboard Spaceship Adventure's set featured great harmonies, tight guitar riffs and the kind of friendly on-stage wit that can win over any crowd. "Farewell" showcased Dan Becker's belting skills and vocal clarity, while "So Loud," included spectacular work on the keys courtesy of Alex Robertson. Mikey Meiers let his vocal talent shine in "Never Coming Back" and also provided entertaining banter between songs that kept the crowd interested. Meiers' shtick incited a wealth of laughter in the audience when he encouraged the audience to buy the T-shirts at their merchandise table for just about anyone they knew, saying, "Dress up your cats! That could be cool." The band displayed an obvious camaraderie as musicians and appreciation for the opportunity to open for two talented singer-songwriters.

The witty banter just kept on coming when Steve Soboslai, a master of awkward sarcasm and puns, entered the stage. The lead singer and guitarist of Punchline welcomed the crowd with an uncomfortably long wave of his hand, breaking the ice and showing that his set would be more like a friendly conversation between musician and crowd than a stiff, one-sided performance.

Soboslai's crisp vocals and volume control really stood out in "Goodbye Stranger" and "Your Face." He encouraged requests from the audience, responding to several shouts for "Heart Transplant." Many fans sang the tune word for word, with Soboslai jokingly adding at the end, "If I could just teach you guys all the songs, I could just drink. I wouldn't even have to play anything. That's called outsourcing."

The high point of his set came when cellist Katie Morrow joined for "Coordinates." The added instrument gave the song more dimension and made for a nice change of pace in the set. Soboslai closed with the very powerful "Universe" and left the stage graciously thanking the crowd and announcing, "I will remember this moment for the rest of my very short life." 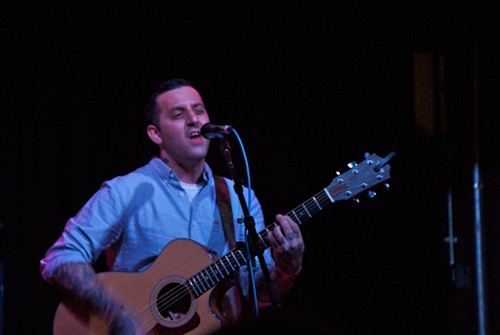 The pop rock vibe of the evening took a punk turn when Anthony Raneri opened his set with the angst-riddled anthem "Blame It on Bad Luck." He quickly announced his excitement for his recently released first solo EP, New Cathedrals. The five tracks just "didn't really work as Bayside songs," according to Raneri, who performed the EP's first track "Sandra Partial." The song, which had "just been sitting on a cassette tape for eight years" before it was recorded, showed off his range and revealed his folk side.

Much like the other performers, Raneri shared his dry sense of humor between songs, saying "Don't listen to me too intently because I'm probably not going to say anything too profound," with a chuckle. He often shared anecdotes related to his day in Pittsburgh and the songs he performed, such as how the bathroom attendant services he was met with throughout the day at the venue convinced him not to take a leak before the show for fear of having to leave another tip.

Raneri performed several Bayside fan favorites such as "Don't Call Me Peanut," which caused the crowd to squeal immediately after its first three notes. He also played "Killing Time," sharing a tale about a fan being inspired to "go AWOL from the army" after asking Raneri about the song's meaning. "I and I" also excited the crowd, as well as "Landing Feet First." When he played "Duality," he mentioned how the music video was filmed in Pittsburgh, stating that having an entire street closed down for it was one of his coolest moments as a band member and adding, "That was pretty fucking badass."

When a fan requested Raneri's signature Matt Skiba cover of "Good Fucking Bye," he instead played Alkaline Trio's "Do you Wanna Know?"

After dozens of screams for "Montauk," Raneri explained that he felt the song sounded horrible live but caved in and said, "I'm gonna give you what you want." The performance ignited shrieks of delight throughout the room.

Raneri played his expected cover of Smoking Popes' "Megan," but succeeded in making it sound just as beautiful as the last three times I heard him perform it. After bidding the crowd adieu, Raneri reluctantly returned to the stage to play Death Cab for Cutie's "I Will Follow You into the Dark." His set contained a cohesive mix of new and old material that contrasted well with the much more pop sound of the other acts.

Young the Giant at Stage AE