Some of Pittsburgh's up-and-coming hip-hop acts are taking to New York City all at once this week. Here's a quick breakdown:

April 24 - The mayhem begins Tuesday when Chevy Woods and Boaz link up for "A Pittsburgh Affair". Taylor Gang recording artist and Wiz Khalifa's partner-in-rhyme, Woods headlines the event at S.O.B.'s. In recent years, that venue's stage has hosted performances by Drake, Kanye West and Rick Ross. On this night, S.O.B.’s showcases two Pittsburgh rap vets. Woods’ music video, "Home Run", has been viewed over 200,000 times as he prepares the release of his new mixtape, Gangland. Joining Woods for the showcase event is Larimer native Boaz. Woods and Boaz are familiar with working together, as Woods was a heavily featured rapper on Boaz and his Govament crew’s 2007 mixtape release, Election Day.

April 24 - Rhyme Calisthenics: The Official MC Competition hosts the fourth show of its NYC Series at Bamboo. The series of five shows began in January as four first-time competitors performed several rap challenges from the large, game show-style wheel, with the hopes of winning and advancing. Tuesday night’s final qualifier round will decide the fourth MC to compete in the subsequent championship round. This month's competing MCs are Baxter Wordsworth, Atlas', Skittlez, and Jess Jaymez. The competition makes its anticipated return to Pittsburgh in early summer. 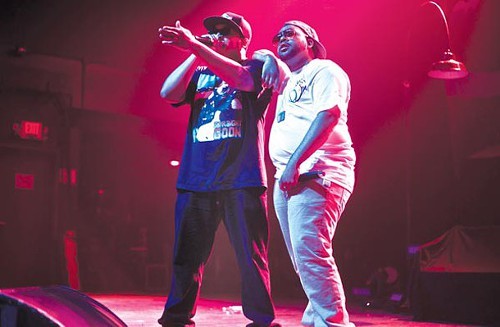 April 25 - Halfway through the Macadelic Tour promoting his newest mixtape, Mac Miller returns to Roseland Ballroom on Wednesday. A year ago, Miller was an opening performer at Wiz Khalifa’s Rolling Papers album release party. Opening for Miller on the Macadelic Tour is rap duo The Come Up. Fellow Pittsburghers, Franchise and Vinny Radio have been performing with Miller for the majority of his most recent tours and are preparing for the release of their new album April 30.

April 26 - Rapper Beedie's Above the Weather Tour began in Pittsburgh on April 14 and continued last week in Philly. This Thursday Beedie takes Manhattan by storm with a performance at the Grisly Pear. The intimate venue should allow the charismatic MC to do what he does best: connect with his audience. Other upcoming tour stops include Erie, Detroit, and a return to Pittsburgh's Altar Bar with Action Bronson.

How to celebrate Mac Miller this weekend in Pittsburgh