Preston/Gainey: Too close to call in House District 24? | Blogh

Preston/Gainey: Too close to call in House District 24?

The stage was set for a showdown between longtime political rivals -- friends turned foes.

Inside the gymnasium at Homewood's Faison Elementary School on March 29, roughly 50 residents of the state's 24th legislative district filled rows of seats in anticipation of a "Meet the Candidates" forum hosted by Homewood community group Operation Better Block.

If they expected a heated debate between incumbent state Rep. Joseph Preston and Ed Gainey, a former Preston aide, they were disappointed. What they got was an awkward political faceoff between Gainey and a guy who didn't even make the ballot.

Preston was a no-show, leaving Gainey to answer questions at the forum alongside William Anderson, another former Preston aide who was tossed from the ballot on March 20.

Preston may have dodged a bullet: The crowd was filled with avid Gainey supporters. On the other hand, all signs point to this election being as tight as it was in 2006 -- when Preston barely bested Gainey in a three-candidate race. And Gainey seized on the chance to deliver an uncontested stump speech less than a month before the April 24 primary. 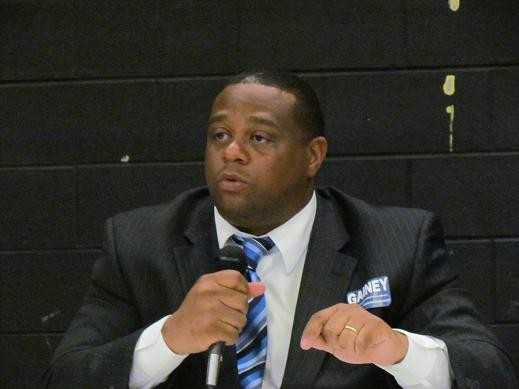 Photo by Chris Young
Ed Gainey holds forth on March 29

"We need a state rep who is accessible to the community," Gainey charged during his opening remarks.

By the end of the nearly two-hour long forum, Anderson had left for another engagement and Gainey sat alone onstage, delivering an impassioned speech to a revved-up audience about the need for new leadership.

"If you haven't done [the job] in 30," Gainey, a former aide to Mayor Luke Ravenstahl and chair of the Pittsburgh City Democratic Committee, told the cheering crowd, "you won't do it in the next two!"

With that, the audience erupted into applause and many in the crowd rose to their feet. Behind me, one Gainey fan yelled out, "I'm with you all the way, brother!"

How many other voters will feel the same way? Despite the passion on display March 29, and an endorsement from the city's leading daily, experts say Gainey has a tough slog ahead.

The race to represent District 24 — which includes Homewood, East Liberty and Wilkinsburg — is expected to be one of the most hotly contested elections this primary campaign season. Preston has held office since 1983, but some say Gainey's third try at unseating Preston could be the charm.

"Preston has survived before when people thought he might not," says Moe Coleman, a professor at the University of Pittsburgh's Institute of Politics. But "this is going to be a really tight fight."

Unlike the 2006 primary, this year's election features just two candidates, mano a mano. In 2006, Anderson captured 524 votes -- votes that, had they gone to Gainey, could have won him the election.

"That's why [Preston's] in trouble," says Coleman, noting that he's spoken to Preston's colleagues in Harrisburg who worry that the incumbent could very well lose this election. "The opposition vote isn't split."

One sign Preston might be in trouble is his struggle to get on the ballot in the first place. On March 20, a Commonwealth Court judge tossed out hundreds of allegedly forged petition signatures, leaving the incumbent with a final tally of 308 credible signatures ... just eight more than the minimum he needed. Days later, Gainey called for a criminal investigation into the alleged forgeries.

"I don't think most voters understand what it's about," Friedman says.

And Gainey may find a tougher climate for his challenge than he did back in 2006. Back then, Friedman says, there was considerable animosity toward incumbents because of a legislative pay raise and the "Bonusgate" scandal. Legislative races this year, by contrast, lack that kind of galvanizing issue.

And while Gainey has won the support of the party's Democratic Committee and its Labor Council, Preston has a base of support that may count for much more.

"Preston beat [Gainey] last time with church ladies," Friedman says. "I see interest groups coming out for Gainey, but that's because they're sick of Joe."

Friedman expects a dismally low turnout for this Democratic primary. Those who do turn out, he says, will be older residents who have known Preston for decades -- and who may be resistant to change.

"I don't think Joe is out of it yet," Friedman concludes.