Diespace at the Dutch Festival

This funny, satirical show by Dutch multimedia performance troupe PIPS:lab sends up social media using slick digital technology. But much of the cleverness of this U.S. premiere resides in the format, which suggests a cheesy 1970s TV game show, complete with theme music and audience participation.

The premise is that the performers are entrepreneurs seeking to capitalize on Western nations’ aging population by creating a Facebook-like site specifically for use by the deceased. They do it by “digitizing your soul.”

Audience members are enlisted to do everything from writing their names in the air with handout LED flashlights – the writing registers on a projection screen – to, in the case of one lucky visitor, actually undergoing the soul-digitizing process.

The feel is nearly carnivalesque: The host is a tall, thin fellow folded into a motorized wheelchair who careens madly about the stage, and two of the other performers are young fellows in comical old-lady drag.

Somehow, this all never feels as over-the-top as you’d imagine. I think it’s because the performers – Keez Duijves, Stije Hallema, Yorrick Heerkens, Daan van West and Thijs de Wit and Sebastiaan Kox – just spin out their smart, simple premise over the course of the hour, never really forcing any message. They don’t have to: Their mockery of the commercialization of cyberspace and our desire to live forever is inherent in that very premise.

Except for a brief doldrums about 45 minutes in – some hijinks likely inserted to mask video-editing necessary for the show’s finale – this is a good-humored but pointed addition to the Pittsburgh Cultural Trust’s Distinctively Dutch Festival. The show was staged in the capacious, versatile space at 805-807 Liberty Ave., Downtown. There is one more performance, at 8 p.m. Saturday night. See www.pgharts.org.

In case you missed it, here are some photos from last night's Sounding Board event at Peter's Pub, which featured Host Skull, SolSis and Dazzletine.

Juan Meléndez, who spent nearly 18 years on death row for a crime he didn’t commit and who now works to end the death penalty, speaks here next Tuesday.

In 1984, Meléndez was accused of a brutal murder in Florida. He could not afford an attorney and within a week, according to a press release from Pennsylvanians for Alternatives to the Death Penalty, he was convicted and sentenced to death on the testimony of two unreliable witnesses. Though physical evidence of his guilt was lacking, his conviction was upheld three times by the Florida Supreme Court.

According to the group Witness for Innocence , Meléndez was released only because of the chance discovery of a transcript of the taped confession of the real killer — a discovery made some 16 years after Meléndez was convicted.

Meléndez was released from prison in 2002. He has since told his story to audiences in North America and Europe. He has also testified before legislative bodies across the U.S., and was active in the successful fight to repeal the death penalty in his home state of New Mexico. He is the subject of the documentary film Juan Meléndez 6446.

According to PADP, Meléndez is the 99th of 140 death-row prisoners in the U.S. to be released on evidence of innocence.

His talk here is sponsored by PADP, Faith in Action Against the Death Penalty, the Pittsburgh Area Jewish Committee, Pittsburgh Amnesty International Group 39, and the Pittsburgh chapter of the ACLU.

"His story highlights the many problems plaguing our capital-punishment system, including the high risk and inevitability of the death penalty being imposed on the innocent," says PADP chair Martha Conley in a statement. "This has been further highlighted by the increasing number of accused being exonerated by DNA evidence. The death penalty is also unfair as it is most often applied to the poor and minorities."

As of October 2011, Florida had 402 inmates on death row second most in the nation after California, with 721. Pennsylvania ranked fourth, with 213.

According to the PADP, "the U.S. is the only industrialized Western democracy still utilizing capital punishment." 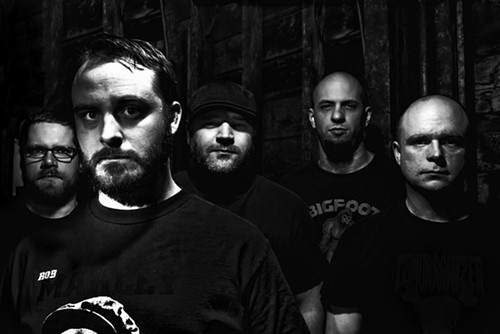 Busy day here at FFW>>; let's top if off with an MP3, eh? This one comes from Invader, whose debut release came out on Innervenus not so long ago. (If you're interested and missed it, check out the piece I did on Innervenus's first Iron Atrocity compilation last year here.) Below, stream and/or download "Never Wanted to Kill You More."

If you're looking for something to do tonight, a passel of top local actors is bringing to life Dashiell Hammett's classic of hardboiled detective fiction.

Rather, actor James FitzGerald has adapted Hammett's novel in the style of a vintage 1940s radio drama. The reading is Downtown, at Bricolage Productions, whose Midnight Radio series specializes in radio-style dramas.

The reading benefits The Actors' Fund, a national nonprofit safety net for folks in the performing arts.

Bricolage is located at 937 Liberty Ave. The suggested donation is $10. The show starts at 7 p.m.

Just a quick heads-up: As is his wont, Pittsburgh-based rapper Jasiri X has returned with another topical tune, this time with regard to the death of Trayvon Martin. Listen below, and visit Jasiri's Bandcamp page for more of his music.

Review: Rollins at the Warhol

Henry Rollins showed up at the Carnegie Lecture Hall on Saturday with the same all-black garb and arms dotted with tattoos that he has been sporting for years. One thing about the appearance of the singer/comedian/actor/columnist/poet was noticeable different, though: His signature buzz cut was half-way gray.

During his performance of “spoken word” (a term that still clings to Rollins’ shows even though “stand-up comedy” is probably more accurate), the 51-year-old one-time punk rock singer made several comments about his own age. These ranged from the zany (jokes about how Black Flag, the band that made him famous, toured in the 1850s with John Adams and Mark Twain in the audience) to the existential (an anecdote about sitting in a New York City diner as the clock struck midnight on his birthday last year and wondering if black coffee and tuna sandwiches would taste any different to him in his 50s).

Rollins can still talk at any entire book page’s length a minute (so you’ll have to forgive the lack of full-sentence quotes in this blog post, as it’d be impossible to get one without bringing and then reviewing a tape recorder) and tightly packed material into his nearly three-hour performance.

He started on politics, roasting the “clown car” of Republican presidential candidates in ways that were a little hackneyed. Like, have you noticed the “frozen face” and “weird hair helmet” on Newt Gingrich’s wife? Also, ever think that gay-obsessed Rick Santorum might secretly want to hold a warm pair of someone else’s balls? Rollins had even memorized CDC statistics for the sake of shooting down Rick Perry’s abstinence policy (yeah, that and a few Herman Cain jokes were obviously written months ago), making the whole routine sounds like a sweaty Keith Olberman “Special Commentary.”

Rollins likes to talk about how often he offends people but, really, one of the keys to his success is that he always comes off as a really nice guy. In mocking Perry, Rollins was quick to interject that there are some “really cool people” in Texas and also clarified that he has no qualms with Chinese people before describing a depressing trip to Tibet. He speaks with an earnest sense of relativism when it comes to cultures, calling a recent encounter with a Pentecostal church’s blues-y gospel band as “the best rock show I saw last year” and recalling his years in the early ’80s punk circuit as a minefield of stabbings, thrown objects and near riots.

The show was a mixed bag as Rollins switched from aging to his Black Flag days to current politics to his appreciation of Abraham Lincoln to the next in his unending line of projects, a Nat Geo show for which he traveled from North Korea to India to Vietnam to Tibet to Uganda to Haiti last year.

Rollins described himself as a “fading alternative icon,” a phase that is somehow both self-effacing and self-aggrandizing. He does always seem to want to have it both ways, possessing both a forceful tough-guy attitude and pleading need to continually have his fans’ attention through a variety of projects. But all great stand-up comedians are a mess of contradictions and Rollins, as always, came out likeable and funny in the end.

A form of an antiretroviral drug to prevent HIV has been found safe, according to the Pittsburgh-based Microbicide Trials Network.

Since October 2010, researchers at the trials network, funded by the National Institutes of Health and based at the University of Pittsburgh and Magee-Women's Research Institute, have been studying a formulation of tenofovir gel, specifically for rectal use, to reduce the sexual transmission of HIV. They presented the results of an early phase of the study last week at the 19th Conference on Retroviruses and Opportunistic Infections.

"One of the most important findings in this study is the formula we used was safer and more acceptable than those in previous studies," Dr. Ian McGowan, co-principal investigator of the Microbicide Trials Network (MTN) tells City Paper.

McGowan notes that a previous study assessed the rectal use of a vaginal formulation of tenofovir, but found participants suffered from multiple "gastrointestinal issues."

"We really felt at the time it wasn't the ideal formulation for rectal use," says McGowan.

Microbicides, or products used in the rectum or vagina to prevent or reduce the sexual transmission of HIV, "are emerging as a National Institutes of Health priority because of the [HIV] epidemic," McGowan says. "There needs to be other options out there for HIV-prevention and at the same time, we need to put a product out there for everyone."

The Phase II study of tenofovir is expected to begin later this year.

There's been a lot of buzz over remarks Gov. Tom Corbett made recently about mandatory-ultrasound legislation. What does our state's leading small-government champion think about legislation creating burdensome government regulations on medical procedures? Well, we're talking about making women jump through hoops before getting an abortion. So not surprisingly, Corbett told reporters that he supported House Bill 1077 "as long as [the ultrasound] is not intrusive."

For some, the bill would seem intrusive by definition: It requires that the ultrasound be projected on a screen that would be shoved in front of the woman's face. But Corbett didn't see it that way. If a woman didn't want to see the images, he said, "You just have to close your eyes."

Corbett did have one caveat, however: He only favored an ultrasound requirement "as long as it's exterior, not interior."

It's the "close your eyes" line that has set up a howl of protest, one so loud that it almost conceals the sound of Democratic hands rubbing together with glee.

But according to one of the state's leading obstetricians, Corbett's preference for "exterior" ultrasounds is at odds with how the law is currently written. And while the law can be amended to meet his concerns, previous changes have only made it worse ... and the whole exercise demonstrates how little thought Republicans have given to medical science.