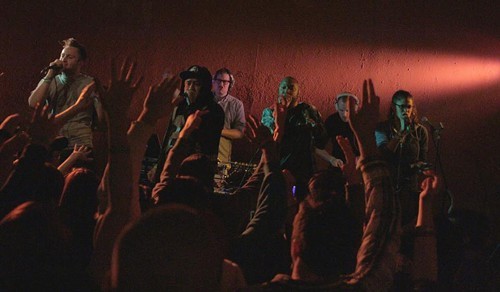 It seems as if popular rap music these days has slipped into a serene coma of empty braggadocio and I-smoke-better-weed-than-you bull. There’s an ever-lengthening list of well-paid lyricists who are young and anxious and have access to well-connected producers with fancy studios and promoters with deep pocketbooks. Rapping is not an easy game and though it may not necessarily involve the gun battles of Tupac and Biggie’s day, it’s a landscape where the ones who are saying things of poetic worth fall somewhere far below the music industry’s Star-
Spangled radar.

It’s not likely that you’ll see any of the emcees in the Doomtree Collective making commercials for Bing or gracing the Grammy stage but all of that stuff matters very little because, in true Doomtree style, they delivered an amazing show at the Shadow Lounge on Monday night. It was all about the energy.

The room was packed with hip hop and poetry aficionados staring at the empty stage, tapping their feet and anxiously waiting for anyone to grab a mic. When Lazerbeak finally stepped behind his drum machine and started playing a blend of hip hop and electro-house beats you could feel the crowd force some dance moves. They were clearly there for the words.

The members of Doomtree — P.O.S., Dessa, Sims, Cecil Otter, Mike Mictlan, Lazerbeak and Paper Tiger — have been performing together for over a decade and the years show in the tightness of their stage presence. They flowed together like a group of siblings, all knowing each other’s words verbatim but always bringing their own charm when leading a song. The performance had the truth-fueled angst of a punk show, beats that begged for dancing and the organic flow of a cypher.

They’re lyrics are always deep and poetic but they remained party-minded, no matter what. With all the call and response, they made it so that whether you were one of the sixty percent of the people there who knew all of their lyrics or not, everyone was a part of the party.

Getting all seven performers together was a recognizably rare occurrence. Chemistry like that doesn’t happen very often and after the experience it might be kinda difficult to tune in to any rap oriented radio programming, but with roots deeply planted in the slam poetry circle, they’d probably be proud of that deterrence.

There are few things more heartwarming to a music fan than a group of musicians who linger after the show signing CD inserts and posing for pictures; it was hard not to be star-struck after that presentation of lyricism over challenging beats. Doomtree promised a rap party and a rap party is what they delivered.