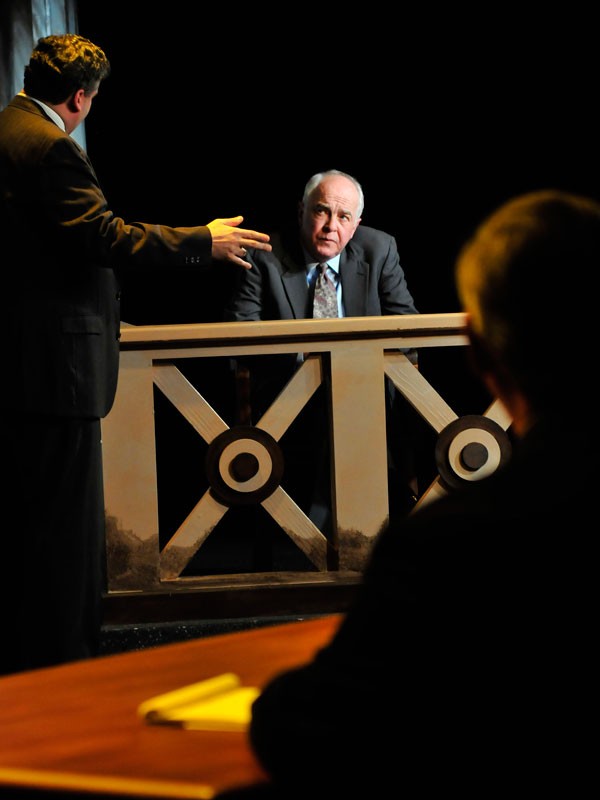 Larry John Meyers as Cyril Wecht in The Gammage Project.

Sometimes when there are talkbacks after live dance or theater performances, the audience doesn't seem to know what to ask, or falls back on old standbys ("What inspired you?").

No such trouble with Pitt Repertory Theatre and Pittsburgh Playwright's world-premiere docudrama about the infamous 1995 death of black businessman Jonny Gammage at the hands of five white suburban-Pittsburgh police officers. There's plenty to discuss, especially when the guest talker is Cyril Wecht, the famously loquacious forensic pathologist and former county coroner who is among the characters depicted in Attilio "Buck" Favorini's play (which has a three-day run at Downtown's August Wilson Center coming up, March 2-4).

As CP's Ted Hoover noted in his review, the production has its rough aspects. But The Gammage Project is nonetheless a powerful anatomy of the miscarriage of justice that included both Gammage's death and the judicial proceedings that followed ... in which the violent demise of a lone unarmed man at a routine traffic stop produced no criminal convictions.

Each of the show's nine performances thus far, at Pitt's Heymann Theater, has been followed by a talkback with someone portrayed in the play. The Feb. 18 show I saw was Wecht's second go-round, and he addressed a few of the more egregious lapses of justice the play highlights.

A lawyer himself, Wecht had also worked at one time or another with all the lawyers the play depicts, whether prosecution or defense. And there can't be too many people who know forensic pathology better. As Wecht noted on Feb. 18, he had been deposed for the following Monday on a West Virginia case of a  police shooting of a black man. (He says he was booked to discuss the case on Geraldo, as well.)

Aside from racism, the play makes clear that the chief impediment to justice for Gammage was the fact that when police officers are charged with crimes, the prosecutors come from the Allegheny County District Attorney's office. That's the same office that must work year-round with law-enforcement officers — a monster conflict of interest.

At the talkback, Wecht said the cases of cops accused of crimes should instead be prosecuted by the state attorney general.

From that conflict of interest, meanwhile, every other problem with the Gammage case seemed to flow. For instance, two of the five cops involved in the traffic stop where Gammage died were never charged with crimes. They were widely seen to have been granted immunity in exchange for testimony implicating the other officers — a move Wecht called "inexplicable."

And there's more. At the coroner's inquest, Keith Henderson, the Whitehall officer whom prosecutors considered their star witness, had said incriminating things about the behavior of other officeers. At the criminal trials, however, he changed his story — and there was no sworn statement from him to consult. Wecht called prosecutors' failure to obtain such a statement "absolutely incredible."

Wecht also asked why prosecutors never made the seemingly obvious move of objecting to two of the juries being drawn from lily-white Chester and Lackawanna counties.

Meanwhile, Wecht was quizzed by an audience member about a key scene in the play involving him (as played by the splendid Larry John Meyers).

The scene (drawn like much of the play from the public record) finds Wecht as a witness for the prosecution. Under repeated questioning by an officer's defense attorney, Wecht testifies that he is unable to say, based on the forensic evidence, which officer did what in the traffic stop, and thus who was ultimately responsible for Gammage's death. The judge declared a mistrial, saying that Wecht's statement would irreparably prejudice the jury.

The head prosecutor, Anthony Krastek, said that he didn't object on the ground of badgering the witness because he thought Wecht was holding his own. Wecht says today that while he wishes Krastek would have objected, he regrets the statement.

"I shouldn't have given that answer," he said last Friday. "I got pissed off." But, he added, he's still not sure the statement amounted to the need for a mistrial.

There are three more chances to see The Gammage Project. The show is restaged next weekend, March 2-4, at the August Wilson Center. Tickets are $15-20.