Ordinarily, reporters don't like to keep mum about a potentially big story. But for months now, the news staffers over at WTAE Channel 4 have been doing just that -- with a story that involves their own well being.

Now that story is beginning to surface. And WTAE employees are asking for the public's help in ensuring it has a happy ending.

Here's the gist: Back in the summer of 2010, the station's reporters and anchors voted in favor of joining a union, the American Federation of Television and Radio Artists (AFTRA). But talks on a new contract with the station's owner, the Hearst Corporation, have gone precisely nowhere.

Until now, employees have been loath to raise the issue publicly. But as frustration with the bogged-down talks has increased, that has been changing. Last month, AFTRA sent out a flyer, urging recipients to "Tell Hearst TV and WTAE managment to play fair in Pittsburgh!" Veteran sportscaster Bill Hillgrove appears on the front --

And speaking of the internet, AFTRA is now engaging the power of SOCIAL MEDIA. Which is where you, dear reader, come in.

In The "Fairness 4 WTAE" campaign has launched its own Facebook page. And just this week, it put out an online petition urging station General Manager Michael Hayes to "bargain fairly" with the on-air folks.

In a letter sent to Hayes last month by AFTRA Pittsburgh Executive Director John Hilsman, the union maintains that "We remain willing to engage with you and/or your representatives and will continue our disucssions with you at the bargaining table. What's new is that we now intend to reach out to friends within our greater Pittsburgh community and engage them as well."

Despite this outreach, WTAE employees were wary of speaking on the record about the dispute, or the working environment at the station. (There are a variety of reasons for their wariness, including sanctions for speaking out contained in their existing personal contracts with the station.)

But off the record, employees have told me that some of the most serious concerns involve not pay, but things like scheduling issues: workers being required to put in very long hours at a stretch, having to put in extra shifts on short notice, working overtime without proper pay or comp-time, and so on. Anchors often find themselves with even less protection from additional assignments.

What do you say to a company that says its up to you to beg co-workers to cover for you if a family emergency requires you to take time off?

How would you like to work for a company that changes your schedule 90 minutes before your scheduled start time?

How would you like to work for a company that approves time off for a family vacation, then tells you "no" just a few days before?

It's worth noting that AFTRA represents Hearst employees in six other markets; the union contends these demands are similar to those already enshrined in contracts at Hearst stations elsewhere.

For that matter, I'm told the demands aren't much different from those which used to govern WTAE itself. Channel 4's on-air talent used to be represented by AFTRA until 1997, when reporter Alan Jennings led a drive to decertify it. Employees narrowly voted for decertification early that year; after results were certified, Jennings promptly left the station for WPXI).

I've put in a call to the station's management, and when I hear back from them about WTAE's position on negotiations, I will post it here.

In the meantime, let's all remember that even the dreaded mainstream media is part of the 99 percent.

About those write-in campaigns ...

The Imprint of War at the University Art Gallery 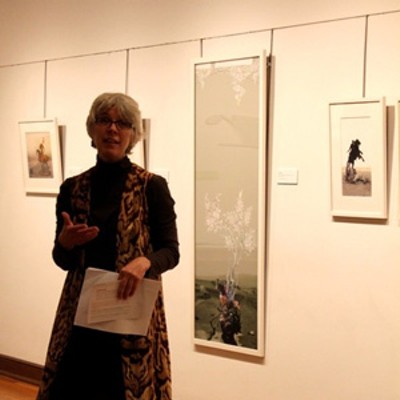