The VIA festival kicked off with a heady bang last night at the Rex Theater on the South Side. The inside was packed to capacity while the outside bustled with staunch music lovers taking quick smoke breaks. The entire atmosphere was thick with excited anticipation.

Hailing from London, Walls opened up the evening accompanied by the video art of Pittsburgh-based Matt Wellins. Also on the bill, with a 3D visual set, was Michigan trio Wolf Eyes, accompanied by New York based visual artist Daniel Iglesia.

FaltyDL took the stage and subtly commanded the crowd to dance. Not that they weren’t already dancing, but the transition of live band into dude-behind-laptop might’ve thrown some people. It was nothing like a straight-up dance music event where all you see are arms in the air and hear the whoops and hollers of people really excited to hear tracks they had only previously heard on their headphones. This crowd was different, diverse and very much there to take all kinds of new sounds in.

Four Tet was one of the biggest names that VIA offered this year. His music is respected and loved by many yet, in a conversation that dwells mostly on the interwebs, has a lot of fans questioning his translation to a live PA performance.  Last night, along with visual duo Abstract Birds, those doubts were put to rest.

His set never sat comfortably between the peaks of tech-restlessness and the valleys of house ambiance. It bubbled with old-school UK garage - a bow to the culture that groomed his dance floor demolishing sound. While he was moving back and forth between old garage and his own modern renditions of dance music in constant conversation with history, he wasn't afraid to mess with the tempo, proof positive of his mastery on the live PA set-up.  Driving the pit to a convulsive frenzy that slowly lurched its way back to the outskirts of the Rex, he cranked the bpm and then slowed it back down until everyone moved like zombie robots. The flavor of the beats followed into a darker moodier pocket of the set. He switched emotions up as if sounds and moods were watercolor paints.

The crowd was hooked on every single one of his moves. He stopped to take a sip of water and look out into the crowd, the Rex responded with those whoops and hollers that I mentioned lacking in the beginning. Yes, we cheered when he drank his water. A slow clap enveloped the room and moved across the Rex like a wave at a sporting event while Four Tet smoothly introduced some noise, then some rock. A minimal atmospheric build became boom-boom-bass, computer glitch and mathy rhythms.

The visuals for his set were actually just as heady as the music. Abstract Birds (Pedro Mari and Natan Sinigaglia) takes the music and syncs all graphic movements to the beats. Four Tet worked with Mari and Sinigaglia beforehand and subsequently played his set practiced and precise like a classically trained musician.

Unlike the visuals attendees experienced from Thunder Horse Video the night of the kickoff party – mostly Brenmar’s twitter handle and his name in a graphic font reminiscent of a screen saver from the early '00s – the art on the screens behind Four Tet was mesmerizing. They embodied the idea of one form of creativity channeling another. The images were poetic and song-like in their own right. Graphic movements matched up with the din of Four Tet's knob turning and were precise and elegiac, flowing and symbolic. They captured the slippery moods of the music and kept time with morphing geometric figures. It was simply amazing.

Finally, after a lot of adjusting to make way for another live, multi-instrumental band, Battles took the stage. They too were one of the more hotly anticipated acts on VIA’s lineup this year as they represent the VIA spirit of bringing back former Pittsburgh residents and giving them a stage and a crowd full of excited music-heads. Formerly of the band Don Cabellero, Ian Williams brought the VIA story full circle.

Battles' flavor last night was a bit mathy and constructed, but then they burst into segments that were pure pop rock. It's the mix that makes them so fascinating. They satisfied every one of my youthful rebellious-rock cravings and every one of my more adventurous desires for straight noise. While rock 'n' roll was at the forefront of their set, it edged into territory that was dance inducing, poppy, and noisy. Slipping between sounds was accomplished with the same effortlessness of a DJ using a crossfader, and they did so on live instruments.

Before their last song, Dave Konopka took the mic and charmingly quoted Sting: "If you love something, you set it free." He thanked VIA for allowing one of Pittsburgh's sons, Ian Williams to return to his city and do what he does best. It was a representation of a feeling that a lot of creatives glean from Pittsburgh, the need to take the inspired spirit and move on to a bigger place. The guys of Battles recognized that and it was bittersweet and beautiful, so very VIA. 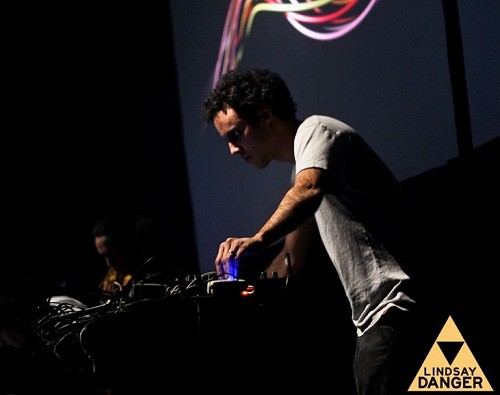