Just hours before Carnegie Mellon University officials and the President of Rwanda formally announced plans to open a new branch of the university inside the East African country, roughly 40 human-rights activists gathered on campus today to denounce the move, calling President Paul Kagame a "dictator" and "war criminal." 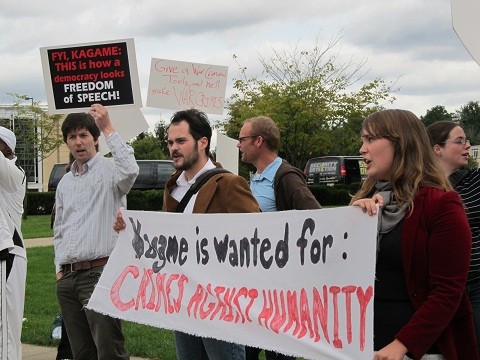 Meanwhile, about 15 counter-protesters demonstrating nearby praised the Rwandan president, and CMU's plans to partner with his government.

"We want students and the citizens of Pittsburgh to know that CMU is dealing with a war criminal," said Claude Gatebuke, a Rwandan native who now lives in Nashville, Tenn. "When universities sign contracts with Kagame, they're not forming friendships with the people in the [East African] region."

"This president places lots of emphasis on education," countered Godfrey Biravanga, a native of Rwanda who has lived in Pittsburgh for the last 10 years. "This partnership with CMU will continue to help Rwanda in its efforts to further develop the country." 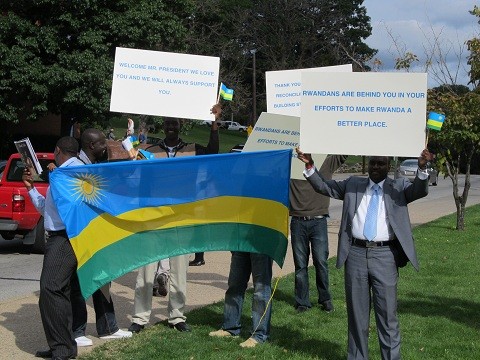 In a Sept. 15 press release, CMU announced plans to open a branch of the school in Rwanda's capital, Kigali, next year, offering graduate-level engineering programs. In addition to the academic partnership, the release stated, CMU will work with the Rwandan government "to develop an innovation incubator, advanced practical training programs, executive education programs and a mobility research center."

"Higher education is a key to success in the global economy," CMU President Jared L. Cohon said in the press release. "We are pleased to bring our expertise in mounting international programs and our culture of innovation to Rwanda and to contribute to the country's emergence as a regional technology hub."

Rwanda has come a long way since the genocide of 1994, when roughly 800,000 Rwandans were murdered during an ethnic dispute between the country's Hutu and Tutsi tribes. Since the genocide, some say, Rwanda has become a model for other African nations to follow. The country, often called Africa's "biggest success story," is now peaceful and economically stable, unlike many of its neighbors.

And some credit Kagame, who took over after the conflict, with leading the country's transformation.

"Kagame stopped the genocide," David Mugabe, a 25-year-old University of Pittsburgh student and Rwandan native, told City Paper as he demonstrated on Forbes Avenue in support of the Rwandan president's visit to CMU. "He's a hero. He's doing great for my country."

But human-rights activists protesting Kagame's visit just a few yards away said the truth about the Rwandan president is much more complex -- and, they argue, it's written in blood.

"Paul Kagame is responsible for the deaths of millions of Africans," said Kambale Musavuli, spokesperson for Friends of the Congo, an advocacy group supporting peace in the Democratic Republic of Congo, which borders Rwanda to the west. "Our demonstration is about justice."

Kagame's critics charge the Rwandan president with waging a "hidden war" in the Congo, where millions have reportedly died in fighting over the country's vast natural resources. Inside Rwanda, Kagame has also been criticized for suppressing free speech and threatening government opponents. In its 2011 World Report on Rwanda, Human Rights Watch lauded Rwanda's continuing "development and economic growth" but cited "numerous violations of civil and political rights, and the government failed to fulfill its professed commitment to democracy." The report singled out claims that Kagame's government had clamped down on independent media.

Kagame, who flatly denies the charges against him, is no stranger to protests. During demonstrations in Paris and Chicago earlier this year, protesters denounced the president's actions in Rwanda and Congo.

Today's protest at CMU was no different.

Protesters held signs -- "Kagame's business is blood" -- and chanted slogans -- "Paul Kagame, you must go!" and "CMU, shame on you!"

CMU's decision to partner with Kagame's government "spits on the lives" of those killed in Congo, Musavuli said.

"My message is: Give a war criminal tools, and he'll make war crimes," agreed Jeff Cech, a human-rights advocate with Congo Story. "Paul Kagame gets this brilliant praise for ending the genocide and setting up democratic values, and it's all whitewashing over the fact that he is a war criminal."

A CMU spokesperson did not immediately return phone calls for comment.

Yesterday, a coalition of African human-rights groups sent a letter to Cohon, criticizing him for partnering with Kagame.

"CMU's announcements about President Kagame's visit represent his story as one of triumph," the letter states. "We regret to inform you that your characterization is dangerously skewed, and that, in its haste to collaborate with President Kagame, your institution may become a collaborator ... by supporting an unjust, oppressive regime.

"If CMU is genuinely invested in peace and development in Rwanda, and if it is determined to cultivate a relationship with Kagame, we are insisting on greater caution and responsibility," the letter concludes. "We urge you to make your partnership with Kagame conditional on improvements in his human rights record and extension of political freedoms."