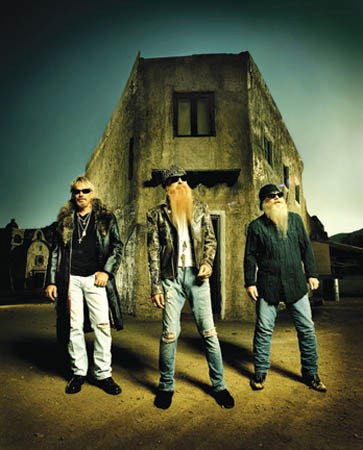 Here's a less abridged version of our interview with Billy Gibbons, a prompt and polite e-mail correspondent!

We'll stand by that statement, especially in light of recent experience where we're seeing three generations of fans out there.  It's cool with us and the audience is telling us most emphatically that it's cool with them.  Win/Win!

ZZ Top's new, Rick Rubin- produced record comes out this fall. You said of Rubin, "he pushes the artists to spend more time reaching down deeper than they normally would."

It's more like he provides another perspective to the process and provides an outside view of the sound ... does it motivate one to move and groove.  He kind of looks like he belongs with us so he's a natural within the circle.  The results are worthwhile.

You've had some on-screen spots throughout the years, most recently on Bones, in which you play a very Billy Gibbons-like character.  Do you ever wish for a role where you play someone who isn't a rocker?

Not sure about taking on a role of someone who doesn't play guitar.  Then again, I do a fairly decent "lost soul" and "religious nut" along with your half-crazed, street corner "eye-on-the-inside".  There's a wide range of "weird" available for the taking.

You're an aficionado of both cars and guitars.  Any other hobbies you'd like to explore if you had the time?

African art is a special passion as, of course, is Mexican cuisine, both "haute" and "bajo."

What bands/records do you have in heavy rotation right now?

Four decades is a long time to be in a band with the same two guys. Have disagreements ever turned to fisticuffs? The angst gets the aim toward 6 strings and 6 skins.  After all, ZZ's a rock band on the move around the world constantly.  Ain't no time for sidetrackin'.

Op-ed: Let's just shut up about Santorum being shut out