Squonk Opera on America’s Got Talent

It's a big week for Pittsburgh performers out of town.

This past Sunday afternoon, the Zany Umbrella Circus performed its new one, Mirette's Circus, at New York City's outdoor SummerStage series, on the Central Park Main Stage, no less. (The charming show had just world-premiered here last week, at the Kelly-Strayhorn Theater.)

And this Friday, the August Wilson Center Dance Ensemble takes its own turn at SummerStage. The troupe, led by Greer Reed-Jones, was chosen to perform the New York premiere of "Regality," by emerging choreographer Darrell Grand Moultrie.

But first, Squonk Opera faces the biggest — and perhaps the toughest — audience of all: America. Not to mention Sharon Osbourne, Howie Mandell and Piers Morgan, the judges on this popular variety-show contest program.

You can catch Squonk on AGT at 9 p.m. tonight on NBC.

The now-venerable but still wonderfully wacky Squonkers comprise a critically acclaimed, globally touring enterprise, but tonight they'll face some new challenges. Probably the most daunting is what co-founder and keyboardist Jackie Dempsey describes as "doing a 90-second scene [when] we're used to doing 90-minute shows."

Another challenge might be one of category. Some people might call Squonk an art-rock band. It is, but it's also a theatrical outfit, one whose shows like Astro-Rama and Mayhem and Majesty typically incorporate homemade props and machines, some of them quite large, not to mention video projections. (Note that Dempsey describes the group's AGT show as a "scene" and not, say, a "number.")

Still, left-field types have appeared on AGT before, and some have done well. (My colleague Al Hoff recalls a successful act consisting of some "guys in inflatable suits, jumping up and down.") And someone at AGT must like Squonk: Dempsey reports to fans via email that the troupe auditioned for the show "many, many months ago," and made enough of an impression to get into this season's Top 48. 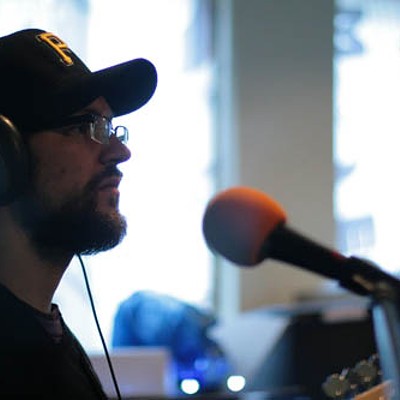