A dispatch from Furry Nation | Blogh

A dispatch from Furry Nation

Since 2006, tail and fur-costumed folks have converged on the David L. Lawrence Convention Center for Anthrocon, a gathering of fans of anthropomorphic (human-like) animals.

Anthrocon 2011 has garnered the largest registration so far, says Dr. Samuel Conway, chairman and CEO of Anthrocon: Some 4,000 people registered in advance, with an estimated 500 additional attendees expected to register on-site. Conway says the event has brought an estimated $23 million to the local economy, and he estimates that the event will just get bigger.

But he has a warning that will no doubt cause consternation among city tourism officials: With the fanbase growing faster than the city's hotel-room supply, Anthrocon may have to consider relocating. "We've just hit our ceiling."

Future plans aside, a lab-coat-wearing Conway (known as "Doc" by everyone who encountered him this morning, and "Uncle Kage" as his furry name) took some time to speak with City Paper. He was joined by a fellow furry, Seikhal.

Do you choose themes for Anthrocon?

Conway: Every year we try to have a playful theme. This year it's "The Anthromorphic Institute of Magic." What we do here, it is a brand of magic. What we do here is we create. The costumists create. The cartoonists, the writers, the dreamers who show up, they all create.

Conway: Why macramé? Why monster trucks? We like animals ... The furry fandom is the first fandom. We have been looking to animals to inspire us since there were stars in the ski. Animals have been our constant companions.

Around town, it's not uncommon to see stares or folks pull out their cell phones and snap photos of those walking with tails or full costumes. Is this bothersome?

Conway: I think people expect it. Some of us look forward to it. People say, "Why do you wear a tail?" Why do the Shriners wear a fez?

Seikhal (a grey husky): I wear a tail because its fun. When I wear my [full suit], I interact with people more playfully ... You're more confident and fun too.

You don't feel objectified or made fun of?

Conway: Think about a woman who just got off work, had a bad day, the boss yelled at her. On her way home she bumps into a 6-and-a-half-foot husky and pulls out her cell-phone camera. She walks away only feel better for that ... One or two people may give you a sour look, but they have no imagination. We're here to have fun.

Seikhal: I've gone to children's hospitals dressed in my fur suit to interact with kids, kids who are terminally ill ... They're stuck in the hospital and they see you walking around -- a big stuffed animal. It makes their day.

Conway: Back in my day, you'd join a fraternity and you'd get a weird nickname ... We're an extremely large, extended furry fraternity, basically.

How does being a furry work? Is it something you, like, wear to work during the week? Or just in your free time?

Conway: It's just like the guys in the stadium who are football fans. We probably have a few people who have cubicles full of stuffed animals and photos of them at Anthrocon. For the most part we're normal human beings. People occasionally do it around town or with other people. It's an entertainment thing. We are all, deep down, frustrated performers. It's a way of expressing themselves, and costumes just show it.

Some television shows or stories have portrayed furries as a kink -- people who dress up as animals and have sex. How do you respond to those perceptions?

Conway: I usually just roll my eyes when people say that … When the first furry convention started in Southern California, there were some overly imaginative people. News cameras just happened to tune in that. [After those truly interested in Anthrocon left], the convention dried up ... These are mostly young people, and young people have sex ... But we have very stringent codes of conduct here, and we want people to feel they can bring their kids. People portray us as we must all be about sex. But that's not us at all. We're all about self expression, but not in that way. 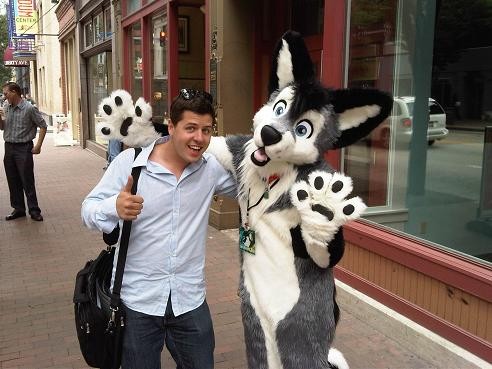 City Paper sales rep Justin Matase makes a new friend. (Matase is the one NOT wearing the costume. That's why he's in sales.)