After extensive discussion and public comment, City Council today postponed for one week a vote on a significantly beefed-up version of a police-accountability bill originally introduced more than a year ago.

In light of the controversial arrest of Jordan Miles, more than a dozen activists urged council to adopt Rev. Ricky Burgess' amended legislation, which would increase police transparency and accountability by, among other things, requiring the police department to release information about citizen complaints against officers. It would also require the chief of police to "prescribe the on-duty and off-duty conduct of Pittsburgh police officers," as well as stipulate how and when strip searches can be conducted by police.

"This bill is about rights that we all share. Human rights," Edwin Everhart, 24, of Shadyside, told council. "Freedom from fear, discrimination … [and] arbitrary punishment."

"This bill would give Chief [Nate] Harper the ability to restore power back to its proper use ... and make policing so much easier," added Darlene Durrwachter, 50, of Central Northside. "It will help the entire city move forward."

After hearing from the public and discussing some specifics of the bill with its authors and city officials, City Council decided to postpone voting on the bill after public-safety officials and the city's law department explained that they had only reviewed Burgess' original two-page bill, not the amended, seven-page measure introduced today.

The original legislation, introduced last March, would have only required the police department to expand its annual report to the public by including such information as the number of officers sued and the average response time to calls for each police zone. Burgess had been working with legal experts, including Pitt law professor David Harris, and community activists to amend the police-accountability bill. Their work produced a significantly more detailed piece of legislation.

If adopted, the new bill would require:

"We want Pittsburgh to be a national leader in police accountability," Tim Stevens, chairman of the Black Political Empowerment Project, told reporters before today's council meeting. "The formula for positive police/community relations is responsible policing."

In May, the police department published its latest annual report. To the satisfaction of advocates for increased transparency, the 2010 report included much more detailed information than in previous years, such as data on use-of-force incidents and traffic stops. It's unclear if the more detailed report was a result of the increased pressure from the members of the community, who in the last year have become frustrated with incidents like the Miles arrest and reports of legal settlements resulting from charges of police misconduct.

Addressing council today, Public Safety Director Michael Huss noted the latest annual report, which addresses some of the requirements stipulated in the legislation. But he and city solicitor Daniel Regan said they did have some concerns with Burgess' original legislation. 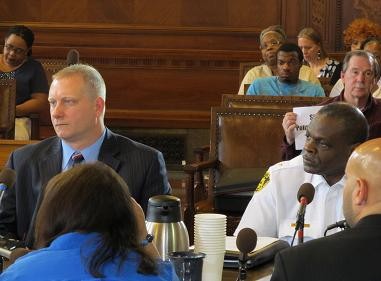 For example, Regan told council that the city is unable to include in the police department's annual report information about the disposition of OMI complaints, saying that it's part of city employees' personnel file. Thus, he said, "The city is precluded from making that public information."

VIA Festival releases lineup, sort of