"This incident has provoked outrage on the part of many people," Tim Stevens, chairman of the Black Political Empowerment Project, told reporters on the steps of the Allegheny County Courthouse. "Try [the officers]. Let the jury decide."

After speaking with reporters outside the courthouse, roughly a dozen activists walked to the district attorney's third-floor office to deliver the petitions. A secretary accepted the petitions on the DA's behalf, telling the activists that neither Zappala nor his spokesperson Mike Manko was available to meet with them.

Activists made a similar delivery last August. Upset that Zappala had not filed charges against officers Michael Saldutte, Richard Ewing and David Sisak, demonstrators handed Manko 1,000 petitions and peppered the DA's spokesperson with questions as to why Zappala hadn't yet acted on the case.

But ever since the feds dropped its case in early May, prompting the city to put the officers back on the streets, activists have been vocal in demanding that Zappala press charges. In the past few weeks, the Alliance for Police Accountability has organized protests at sites such as the police headquarters, on the North Side, and the Office of Municipal Investigations, in the Strip District.

"We are looking for a response," Brandi Fisher, of the APA, said after today after leaving Zappala's office. "What is taking [Zappala] so long?" 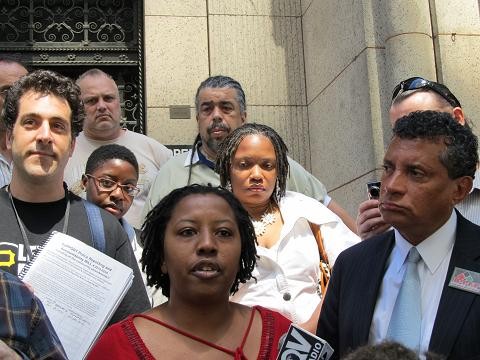 "I don't know if he's waiting for us to get tired," she added. "There's no way that DA Zappala doesn't know that a crime was committed."

Fleeting Pages is Popular, But Not Profitable