WRCT's What Would Your Mother Say | Blogh

WRCT's What Would Your Mother Say 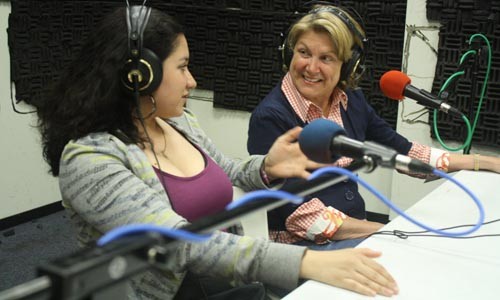 Susan Morris (right) on the air.

It's Tuesday night on WRCT and a Carnegie Mellon student panel is explaining to host Susan Morris about "sexiling." Sophomore computer-science major Amy Quispe says it's when one roommate kicks out the other for the purpose of hooking up. Morris gets the idea, but she calls it "sexting" instead, which provokes laughter from the college kids.

Welcome to What Would Your Mother Say? It's a brisk, 60-minute, live-on-air conversation in the basement of the Carnegie Mellon University Center between college students, moms and Morris. Sometimes, experts on topics as varied as nerds, depression and sex come to chat. There's a lot of laughter, but it's all as earnest as the incoming emails seeking advice on a weed-smoking roommate or whether a casual hook-up is ever a good idea.

Morris was born in New York, raised in Pittsburgh and went to Mills College, in California. The veteran of Pittsburgh's WDUQ, as well as National Public Radio, just moved back from Stanford, Calif., where What Would Your Mother Say? was born five years ago.

Back then, Morris was doing "little segments in a show on finance for students, and this friend of mine said, 'That sounds really boring, Susan, why don't you do a show called What Would Your Mother Say? and I'll fund it.'" Morris suspects her friend, who then had college-aged kids (Morris' were a bit older), wanted her daughters to listen to somebody's mom, even if it wasn't their own.

The Pittsburgh show has been on-air about two months. Tonight there's one mom, Niki Gorecka, who has four kids and is still getting the hang of her radio voice. Amy Quispe, freshman Lindsay MacGillivray and the lone male -- sophomore physics major Dan Kirby -- are more relaxed. But everyone has something to add about tonight's hot topics, drama queens and dating rules.

According to Morris, a more accurate title for the show might be What Would the Students Say?, but that's not as snappy. Besides, both the students and the moms learn from each other. The kids want to know what the moms think, and the moms can lecture a little bit, but not too much. Quispe loves being on the show because "I'm encouraged to talk frankly," she says.

On the topic of dating and hooking up, Gorecka and Morris say it was different in their day. But Kirby offers the soothing commentary for anyone with "kids today! hysteria.": "I think even today people don't expect sex on the first date," he says.