John Fetterman and Braddock: living by the seat of their pants (UPDATED) | Blogh

John Fetterman and Braddock: living by the seat of their pants (UPDATED)

According to the New York Times, Levi Strauss is set to launch a new marketing campaign -- one that uses the long-struggling Mon Valley town of Braddock as a backrop. Residents of the town will be used as models.
click to enlarge 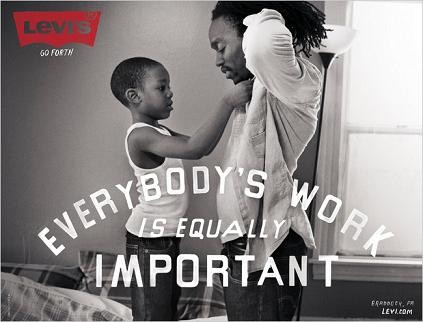 Warning: The Times article contains the word "gritty," in accordance with journalism rules governing the coverage of Mon Valley towns. (Though the word "hardscrabble" is absent. Must be an oversight by the copy desk.) Also per media guidelines, the story notes that Mayor John Fetterman has a tattoo of Braddock's zip code on his arm.

Says the paper of record:

Levi Strauss executives plan to put their money where their pants are, donating more than a million dollars over a two-year period to assist Braddock in renovating a community center and further developing an urban farming program.

And the company will forgo using models for the campaign, instead casting residents of the Braddock area and paying them to appear in the ads. Some ads will include the words "Braddock, Pa." in a corner.

Braddock will also have a star turn on an hourlong show "sponsored by Levi's, to appear online and on the IFC and Sundance cable channels."

Now I know what you're thinking, and so does John Fetterman.

"Across the board, it is an authentic, organic partnership," Mr. Fetterman said. "At no point did it ever feel it was a marketing campaign."

"They didn’t show up with magic beans and a couple pairs of free jeans and say, 'Come be in our ads,' ” said Mr. Fetterman ...

For instance, a young single mother who recently lost her job will appear in print ads and billboards, Mr. Fetterman said, and "the money she received helped out a lot."

Fetterman seems to have some weird gift for attracting publicity to his neck of the woods. Media types can hardly help fixating on his size and skin art. (And no, City Paper is not immune.) Nor is Levi's the first bunch of folks to see Braddock as an emblem of America's efforts to pick itself up off the mat. Earlier media coverage has made Braddock a veritable metaphor for the nation's post-post-industrial malaise.

Hell, this isn't even Fetterman's first experience with ad campaigns: The subject of a full-blown Rolling Stone profile, he was also a pitchman for a green technology campaign. Now apaprently it's his constituents' turn to be featured.

Fetterman's an utterly sincere guy; besides, he can crush me like the tiny insect I am. Braddock deserves every break it can get, and Levi's deserves credit for making a meaningful investment. Still ... am I the only one who feels like there's something unappetizing at how modish the town's hardship has become?  I mean, at this point, you've gotta feel for the places like McKeesport, Duquesne, and Rankin -- places struggling just as much, but without even the consolation of a single Geico ad.

That isn't Fetterman's fault of course; his job is to worry about Braddock, and that's enough for any man. But if I were a Mon Valley official, I'd be shopping around for tattoos and waiting for my close-up.

UPDATE: Fetterman called me up a little bit ago, and wanted to stress that he himself will not be making any additional cash from the Levis campaign: It's all going to community projects, or individual members of the community.

Echoing remarks I quoted above, Fetterman said that "this wasn't a typical 'pose here, pose there, let's be a bunch of circus poodles'" type promotion. "It was a completely dignified process" he says -- and you aren't going to start seeing Levi's logos appearing on street signs, either.

Fetterman seemed sensitive to the idea that anyone would see any sign of self-promotion in this. "Everything I'm trying to accomplish here is to improve the quality of life in this community," he says, noting that he has turned down other offers that didn't further that goal: "I've had two dozen reality-show offers, but I don't take any of that stuff seriously."

Fetterman, of course, agrees that other Mon Valley towns deserve attention and help too, and what to do for them "really is a serious question."

After all, he says, "The Mon Valley can't count on the creative class" -- a reference to Richard Florida, the former CMU professor whose ideas on talent attraction have long been a punching bag for Fetterman. And even charities and other social service providers have let the area down. Braddock, after all, lost a hospital operated by UPMC last year.

"The state's biggest charity bailed on our town," says Fetterman. "And then Levis came in -- and was totally genuine."

City Council: the fear of fear itself