Summer Heights High: Schoolin' and Foolin' from Down Under | Blogh

Summer Heights High: Schoolin' and Foolin' from Down Under 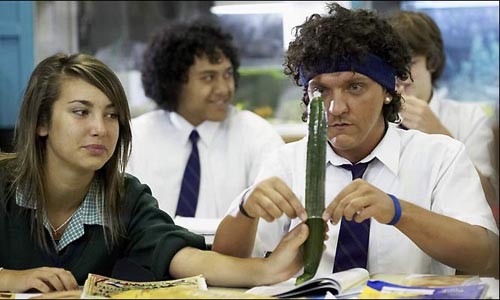 It's Condom 101 for Jonah (Chris Lilley)

Some people hate it, but I'm a fan of the newish Comedy of the Uncomfortable (The Office, The Comeback, Flight of the Conchords, the occasional film feature).

Anything is better than worn-out sit-com tropes (Two and Half Men causes me other sorts of pain), and let's face it: Pain is the root of comedy, not squishy take-aways about being friends.

I checked out the new cringe-and-chuckle offering debuting here this week -- an Australian import, now airing on HBO. Summer Heights High -- dispensed in half-hour doses -- is a mockumentary set in an ordinary high school. It's the brainchild of one-man-band Chris Lilley, who besides creating the show, also writes the scripts and portrays the three major characters.

The first episode was primarily set-up and it looks promising. Even the best high school experience is still a Petri dish for painful (yet funny) experiences.

We meet Lilley's three protagonists, including Jonah, a rambunctious Pacific Islander whose bullying and disruptive behavior is funny (he accuses a female teacher of farting near him, and, of course, her denials, however true, ring false) and sad (this kid has a boatload of proverbial issues).

Then there's  Ja'mie (pronounced Jah-MAY), a self-absorbed exchange student from a posh all-girls high school. She waves far too much and already reminds me of somebody I know and find irritating. I sense her humiliating take-down is imminent.

Lastly, there's Mr. G, a "professional performer" who somehow has ended up being the assistant drama teacher at a provincial high school. Every other year, Mr. G writes an original play that the school performs; past extravaganzas -- his specialty -- have included "IKEA: The Musical" and "Tsunami-rama," a look at the 2004 tsunami set to the music of Bananarama.

These early character sketches all contain the broad aspects of typical caricature -- the self-deluded, nellie drama teacher is certainly popular comedic fall-back -- but previews suggest that upcoming plot developments will serve to stretch these conventional portrayals.

Also, I'm hoping that the mockumentray framework will help keep these characters grounded more in reality than parody. The best mockumentaries walk that fine line where all the wacky or off-kilter behavior they present still could be true. It's the "real" aspect that means more funny and/or more painful.

Lilley -- who I was previously unaware of, and a quick Google search suggests that's perfectly reasonable -- is a gifted physical comedian. (He also turns in three great accents.) The shape of his face means his teen-age Ja'mie looks a bit drag queen-ish, but he's extra fantastic as the hyper Jonah -- and really, when you process that one actor is performing these three disparate roles, it's all impressive.

I'll be checking back into class next week (new shows air on Sundays, with repeats during the week and shows archived OnDemand). If Lilley continues to make me cringe and laugh nervously, I'll consider myself well entertained.

Ruby and Other Weight-Loss Tales