The Shield: The Long Goodbye | Blogh

The Shield: The Long Goodbye

I'm a pretty emotional TV watcher. Not that I cry or laugh excessively, but I get pretty attached pretty quickly to certain shows. Sometimes my infatuation lasts and other times, it wanes as soon as something even a little better comes along.

I had a brief infatuation with the NBC show Chuck and I'm really embarrassed to say, the Friends spin-off, Joey. But other loves have stayed. I still watch my DVDs of WKRP in Cincinnati and the Ken Wahl classic Wise Guy like they were still on every week.

There aren't that many current shows that keep me completely enthralled -- Lost, House, and the king of them all, The Shield. There's not a better-scripted, better-acted, more gripping show on television. And last night it all started to come to an end with the series finale.

I knew in the first 10 minutes of this series that I'd probably be hooked for as long as the FX show survived. And in the last 10 minutes of that episode -- when Michael Chiklis' character Vic Mackey raised his pistol and shot a fellow cop in the head to hide his criminal behavior -- there was no doubt I was in for the long haul.

And while I'm excited to see how this series will end, I can't seem to convince myself to get the train rolling. I didn't watch the first episode of the final season last night (it's a hard thing to watch before bed), so I got up early to check it out before work. But I couldn't do it. I knew once I pressed play in the DVR that I was bringing to an end what arguably could be called my favorite television show of all time.

That's what a great cast of characters -- Chiklis, Walt Goggins, Jay Karnes, Michael Jace, CCH Pounder, Benito Martinez, Catharine Dent and David Rees Snell -- will do. They suck you into their world. Over the years, the cast has been filled with top-notch actors with incredible performances by Forrest Whitaker, Glenn Close, Anthony Anderson and my favorite, former regular Kenny Johnson.

But that's it. Once I hit play some time this evening, there will be no more action, no more drama, no more chewed fingernails from walking the tightrope with Vic and the rest of the characters. I have to admit, I'm interested to see what happens: How it will all end. How do you dispense with characters that are likeable but also have to receive their comeuppance for all of the bad stuff they've done over the years?

Lucky for the viewer it was a lot of really bad stuff that made for really great television. 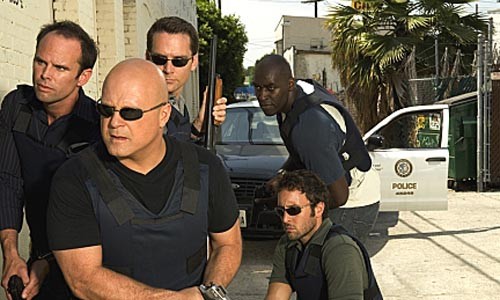 Speaking of The Shield , Flipping